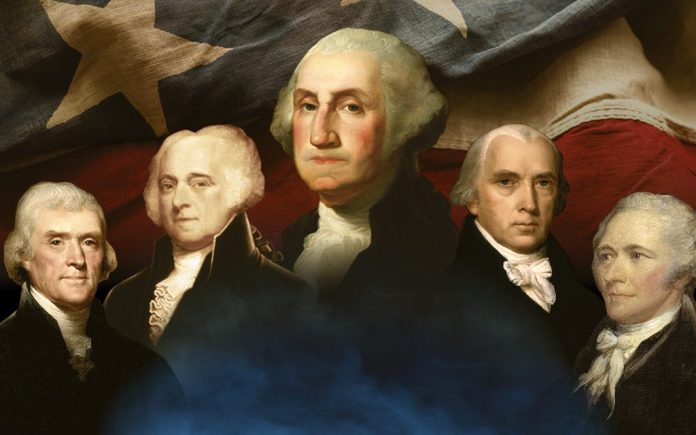 As I sit here in my office and make ready to enter my studio, my mind drifted off with melancholy thoughts about our Founding Fathers and what they gave to their posterity; which is us!  Unfortunately, I fear that John Adams was correct when he said, “You will never know how much it has cost my generation to preserve your freedom. I hope you will make a good use of it.”  We are a spoiled people, uncaring about the blood that was shed to make way for freedom and individual rights… Life, Liberty and the Pursuit of Happiness, Property and Prosperity.

I dare say are forefathers didn’t truly know, at the beginning, that they were actually building a new nation; a nation that would eventually become a super power monument for freedom and liberty.

The settling of this land, was as rough and tough as it gets: They worked hard to produce food and lumber, dig wells for water, establish communities.  There was an art to their work, be it carpentry, millers, bakers, café or restaurant owners, waiter and waitresses, farmers, blacksmiths, candle makers, upholsterers and seamstresses, journalists, authors; whatever the occupation, their work, their art was their life; it identified them as well as provided for them.  In this way they were very independent; they bought they sold they bartered; it was all a part of their way of life. There were some imports from the homeland of Great Britain but for the most part they were self-sufficient and growing quite independent.

While I’m sure there were those who were not so full of faith, America’s pilgrims and settlers new the blessings of thankfulness and they were grateful to God for seeing them through each winter and the bounty of each harvest.  They relied on God and their own strength, fortitude and abilities to make their way in life, and to care for their children. Dependence on God is true Independence.

Great Britain’s King George III needed money to pay for a recent war against the French and to help with the cost of ruling over Britain’s huge empire. The king decided to tax the colonies to raise money. The colonists resented being taxed by the king when they had no say in government affairs.

Does this sound familiar?

You know the story: Our contented ancestors were now finding making a living more difficult for they were giving more of their income to the king. (For the good of the king’s community)

Living in the colonies here in America, they had no representation from the motherland, the king imposed and restricted and licensed them; even ordering them as to what “religion” they should practice.

The King imposed a tax on official documents in American colonies. Included under the act, known as the Stamp Act.  This legislation levied a direct tax on all materials printed for commercial and legal use in the colonies, from bonds, licenses, certificates, newspapers and pamphlets to playing cards and dice. Though the Stamp Act employed a strategy that was a common fundraising vehicle in England, it stirred a storm of protest in the colonies.

One of the grievances our Founding Fathers laid before the king (The Declaration of Independence of July 4, 1776) is stated: “He has erected a multitude of New Offices, and sent hither swarms of Officers to harass our people, and eat out their substance.”

These were bureaucrats, not elected representatives but they made life miserable with their mandates, regulations, licenses and demands of permits. You see in the king’s mind, the colonists owned nothing, all they had belonged to the him, to Great Britain; they were just serfs and peasants in his mind and on a land, he never stepped foot on. …And these independent colonists were starting to annoy the king with their rebellious ways.

In the minds of the colonists, they owned the land they settled on, they owned their businesses. They had no representation from the motherland, no say in the ways of the king’s government, so why should they be his subjects and bend to his ways now?

War broke out.  It was only 2-3 percent of the colonists who were willing to fight for their homeland and way of life, but they fought hard!  It was an impossible war; we were out gunned and out numbered.  One advantage we had over the British soldiers, our American Patriots could shoot straight and accurately. The other advantage was they had hearts that longed and yearned to be free.

“There’s a certain enthusiasm in Liberty causing mankind to rise above itself in acts of bravery and heroism.”  Alexander Hamilton

In today’s world we seem to have grown dependent not on God but on government, which is form of slavery and servitude.  We want life to be easy.  For many their jobs are drudgery.  They work only out of necessity.  The pride in their jobs is missing and so is the feeling of personal accomplishment in their hearts and minds.  We are taxed and licensed, regulated and mandated at every corner of our lives and businesses. But many accept this as a good thing or as normal politics.

It is normal for tyrants but it is tyranny to a free people.  If you rely on government, you are not independent nor are you free.  We’ve reached a time in our own nation where our elected officials believe themselves to be better than the people they supposedly represent and above the laws they impose upon We The People.

Governments are instituted among Men, deriving their just powers from the consent of the governed

(Lest we forget in a Constitutional Republic form of government the people are the government and the Constitution is our contract with the elected representation; it is their guideline.)

WE ARE NOT A DEMOCRACY

After much debate and heated arguments for months and months, a group of Founding Fathers agreed on a Constitutional Republic form of government.  The Organic Constitution for which they wrote and agreed, gave federal government very limited powers.  It certainly doesn’t look and feel this way today; does it?

We are once again under siege by tyrants.  Not just one king and his ‘governors,’ but a multitude of the elected and their bureaucrats.   My favorite line from the movie The Patriot, was when the delicates tried to convince Mel Gibson’s character, Benjamin Martin, to join in the fight.  “Would you tell me, please, Mister Howard, why should I trade one tyrant three thousand miles away for three thousand tyrants one mile away? An elected legislature can trample a man’s rights as easily as a King can.”

And this is where we are today America.

“The marvel of all history is the patience with which men and women submit to burdens unnecessarily laid upon them by their government.”  George Washington

Back to my original question:  Would our Founding Fathers recognize America Today?

Our Founding Fathers know tyranny and they would recognize America as that today.

Better than we, they would immediately see that we are no longer a free people.  They might even say, this is much worse than it was in our day.  Fighting a king was tough but we were strong and determined for a cause and a dream when all men – regardless of color or gender (of which they knew there were only two) would live in freedom and enjoy Liberty.

Did you know that many of our Founding Fathers believed this nation was called to be an evangelical?  Imperfect men yes, but the majority were God fearing men of principles and Christian morals; so much so, that they based our Constitution on Biblical laws and Godly principles.

“Our Constitution was made only for a moral and religious people. It is wholly inadequate to the government of any other.”

Perhaps this is the reason the LEFT, the WOKE, and the GLOBALIST fight so hard to remove God from all in this nation and want this nation to fail as a sovereign country!

I love to quote our Founding Fathers, however if they were here today, they’d be rallying us all to go back to our Founding principles, sift the chaff from the wheat and point to The Declaration of Independence, reminding us of their pledge to give their lives, their fortunes and their sacred honors.

Is there one among us today who would say such?  I fear that in DC and in many of our state houses, sacred honor is missing; the old saying honor among thieves is a far cry from the honor our Founding Fathers practiced in their lives.

In the movie The Patriot, Benjamin Martin did fight, but only after it became personal.  His character was based loosely on two men, who made the way for General Washington’s victory in Yorktown.  Look them up, Brigadier General Thomas Sumter, known as the Game Cock and Brigadier General Francis Marion, knows as the Swamp Fox.

Liberty is personal! Freedom is personal!  Must we suffer an attack on our homeland before we realize the fight for Independence and Freedom is never won: “The price of freedom is eternal vigilance,” Thomas Jefferson

I believe our Founding Fathers knew that freedom would be most difficult to keep.  They gave us many warnings, for which we ignored. They set up a Constitutional Republic form of government, in which….

Governments are instituted among Men, deriving their just powers from the consent of the governed

If the spirit of our Founding Fathers still dwells within the hearts of American Patriots today, they might tell us “Suck it up buttercup” and dig your heals in.  We left you the format the equation for Freedom and Liberty… so get busy; it isn’t a lost cause… “But when a long train of abuses and usurpations, pursuing invariably the same Object evinces a design to reduce them under absolute Despotism, it is their right, it is their duty, to throw off such Government, and to provide new Guards for their future security” …

Pray on your knees, Live for God, Rise up and Protect this nation from the arrogant tyrants… and

Take a coffee break with Beth Ann each weekday morning 10:06-11am CT.
She’ll cover numerous topics and share lots of opinions as she fights to
Bring America Home©