Voting Fraud Is Real: The Electoral System Is Vulnerable

The United States national election is now only three months away and it should be expected that the out-and-out lies emanating from both parties will increase geometrically as the polling date nears. One of the more interesting claims regarding the election itself is the White House assertion that large scale voting by mail will permit fraud, so much so that the result of the voting will be unreliable or challenged. To be sure, it is not as if voter fraud is unknown in the United States. The victory of John F. Kennedy 1960 presidential election has often been credited to all the graveyards in Mayor Richard Daley’s Chicago voting to swing Illinois into the Democratic camp.

The Democrats are insisting that voting by mail is perfectly safe and reliable, witness the use of absentee ballots for many years. The assertions by Democratic Party-affiliated voting officials in several states and also from friends on the federal level have been played in the media to confirm that fraud in elections has been insignificant recently. That may be true, up until now.

The Democrats, of course, have an agenda. For reasons that are not altogether clear, they believe that voting by mail would benefit them primarily, so they are pushing hard for their supporters to register in their respective states and cast their ballots at the local mail box. Nevertheless, there should be some skepticism whenever a major American political party wants something. In this case, the Democrats are likely assuming that people at lower income levels who will most likely vote for them cannot be bothered to register and vote if it requires actually going somewhere to do it. They have spoken of “expansion of voting,” presumably to their benefit. The mail is a much easier option.

A Fox News host has rejected the impelling logic behind the mail option, saying “Can’t we just have this one moment to vote for one candidate every four years, and show up and put a ballot in without licking an envelope or pressing on a stamp? If you can shop for food, if you can buy liquor, you can vote once every four years.”

The fundamental problem with the arguments coming from both sides is that there is no national system in the United States for registering and voting. Elections are run at state level and the individual states have their own procedures. The actual ballots also differ from voting district to voting district. To determine what safeguards are actually built into the system is difficult as how electoral offices actually function is considered sensitive information by many, precisely because it might reveal vulnerabilities in the process.

To determine how one might actually vote illegally, I reviewed the process required for registering and voting by mail in my own state of Virginia. In Virginia one can both register and vote without any human contact at all. The registration process can be accomplished by filling out an online form, which is linked here. Note particularly the following: the form requires one to check the box indicating U.S. citizenship. It then asks for name and address as well as social security number, date of birth and whether one has a criminal record or is otherwise disqualified to vote. You then have to sign and date the document and mail it off. Within ten days, you should receive a voter’s registration card for Virginia which you can present if you vote in person, though even that is not required.

But also note the following: no documents have to presented to support the application, which means that all the information can be false. You can even opt out of providing a social security number by indicating that you have never been issued one, even though the form indicates that you must have one to be registered, and you can also submit a temporary address by claiming you are “homeless.” Even date of birth information is useless as the form does not ask where you were born, which is how birth records are filed by state and local governments. Ultimately, it is only the social security number that validates the document and that is what also appears on the Voter’s ID Card, but even that can be false or completely fabricated, as many illegal immigrant workers in the U.S. have discovered.

In a state like Virginia, the actual mail-in ballot requires your signature and that of a witness, who can be anyone. That is also true in six other states. Thirty-one states only require your own signature while only three states require that the document be notarized, a good safeguard since it requires the voter to actually produce some documentation. Seven states require your additional signature on the ballot envelope and two states require that a photocopy of the voter ID accompany the ballot. In other words, the safeguards in the system vary from state to state but in most cases, fraud would be relatively easy.

And then there is the issue of how the election commissions in the states will be overwhelmed by tens of thousands of mail-in ballots that they might be receiving in November. That overload would minimize whatever manual checking of names, addresses and social security numbers might otherwise take place. Jim Bovard has speculated how “The American political system may be on the eve of its worst legitimacy crisis since the Civil War. Early warning signals indicate that many states could suffer catastrophic failures in counting votes in November… Because of the pandemic, many states are switching primarily to mail-in voting even though experiences with recent primaries were a disaster. In New York City, officials are still strugglingto count mail-in ballots from the June primary. Up to 20% of ballots ‘were declared invalid before even being opened, based on mistakes with their exterior envelopes,’ the Washington Post noted, thanks largely to missing postmarks or signatures. In Wisconsin, more than 20,000 ‘primary ballots were thrown out because voters missed at least one line on the form, rendering them invalid.’ Some states are mailing ballots to all the names on the voting lists, providing thousands of dead people the chance to vote from the grave.”

Add into the witch’s cauldron the continued use of easily hacked antiquated voting machines as well as confusing ballots in many districts, and the question of whether an election can even be run with expectations of a credible result becomes paramount. President Trump has several times claimed that the expected surge in mail-in voting could result in “the most corrupt vote in our nation’s history.” Trump is often wrong when he speaks or tweets spontaneously, but this time he just might be right. 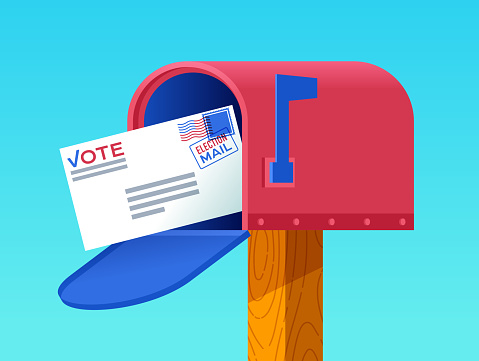