Home Politics Election 2020 The Urgency Behind the Drive to Keep Kamala Harris From Being Biden’s...
PoliticsElection 2020

The Urgency Behind the Drive to Keep Kamala Harris From Being Biden’s VP: Control of the Democrat Party for 20+ Years Is in the Balance 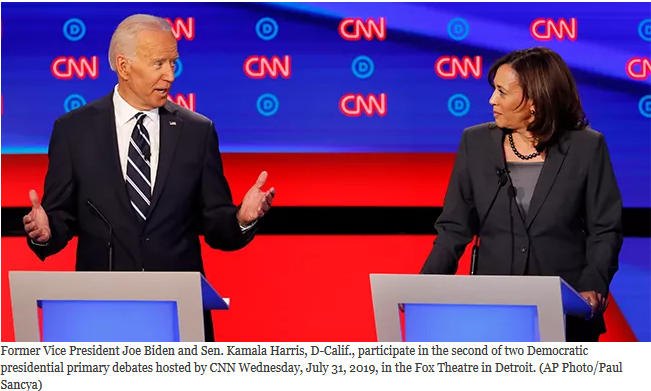 By Shipwreckedcrew for Red State

Earlier today, my colleague Brandon Morse reported on the behind-the-scenes battle over whether Kamala Harris should be the choice for Vice President by Joe Biden.

From the moment she dropped out of the primary race, speculation has focused on Harris as the person who “checked the most boxes,” made so, even more, when Biden announced an intention to select a “woman of color” to be his running mate.

On the surface, it would seem that Harris is the “complete package” in terms of what Biden’s camp might think is the perfect running mate.  She’s an experienced campaigner, is very telegenic, and has a sharp tongue — although that quality has led to a stumble or two along the way as words have sometimes come back to bite her.

But these qualities make her nearly the perfect campaign trail surrogate that early-stage dementia sufferer Biden is going to need.  He needs someone youthful and vibrant, who can do 4-5 stops a day for several weeks without much of a break, delivering the same basic stump speech attacking Donald Trump over and over — while remaining enthusiastic.  That is a much more difficult task than most imagine.  But Harris seems to possess the qualities to do just that.

Her vulnerabilities throughout the primary season always seemed to be from the “left” due to her years as District Attorney in San Francisco and Attorney General of California.  In both positions, she did, at times, advocate for “law and order” policies — she defended California’s death penalty statute — that have become anathema to the far left-wing radicals who now rule the party on those topics.  Her politics have never been that of a doctrinaire liberal like Democrats such as Bernie Sanders and Elizabeth Warren, she’s more “transactional” in her approach in the mold of Dianne Feinstein, the former Mayor of San Francisco who has, nevertheless, been labeled as a “moderate” Democrat for three decades.  Harris learned her approach to elective politics under the tutelage of Willie Brown, with whom she is alleged to have been involved in a long-time personal relationship.  Brown was the long-time Democrat powerbroker in California as Speaker of the California Assembly when he held that post during the 16 consecutive years the GOP held the Governor’s office under George Deukmejian and Pete Wilson — and Brown still got things accomplished for the Democrat party.

As an example of how politically savvy Willie Brown was, he managed to hold on as “de facto” Speaker after the GOP won the majority in the California Assembly when he cut deals with two GOP members to have the Minority Democrats vote with the two GOP members to make one of the GOP Members Speaker.  Because that GOP Speaker owed his position to Brown and Brown’s minority caucus, Brown pulled all the levers of power behind the scenes.

So, if Harris seems to fit the job description for VP so well, why are the “long knives” now out for her behind the scenes?

I noted on Sunday that the Daily Caller leveled a broadside at rising VP contender Karen Bass, a California Congresswoman who is currently Chair of the Congressional Black Caucus, over her past praise for Scientology in Los Angeles, and its founder L. Ron Hubbard.  Not too long after that story hit the internet, the Biden campaign announced that it was delaying the announcement of a VP selection for two weeks, when August 1 had long been rumored as the day that Biden would announce his selection.  The Daily Caller story noted that Bass’s recent rise among the contenders for the VP slot was being aggressively pushed by House Speaker Nancy Pelosi and the California Democrat Caucus in the House, a potent force behind the scenes given their numbers and access to huge amounts of campaign contributions from California.

If the Daily Caller had it correct, that means House Speaker Nancy Pelosi, from California, and about 40 other Democrat members of the House from California, are actively opposing a sitting Senator from California being named the VP running mate for Joe Biden where, if he wins, the Vice President would likely one day be tasked with taking over as President.

THAT, ladies and gentlemen, is the crux of the problem.

From the moment Donald Trump beat Hillary Clinton in 2016, the Democrat Party has been convinced to a metaphysical certainty that they would recapture the White House from the TV Reality Show President in 2020.  That belief led every “Tom, Dick, and Harry” in the Democrat Party to enter the primaries thinking they had what the country needed, and anyone could beat Trump.

But what quickly came to be recognized was that the political beatings the Democrat party had taken during the Obama years had left them woefully short of “adults” in position to enter the race for the Democrat nomination in 2020.  How else does the Mayor of South Bend, Indiana, end up a top tier candidate until almost the very end?

So the 2020 primaries became a contest of mostly ne’er-do-wells and wannabes, with the Party being forced, in the end, to “rally” behind Biden.

The working assumption is that Biden, even if he wins, will never serve out his entire term.  But even if he does, he’ll never run for re-election.  That means if Biden wins, his VP will either 1) assume the office of POTUS when Biden steps aside, or 2) run as a de facto incumbent in Biden’s place in 2024.  If that happens, all other factions of the modern Democrat Party built on a foundation of “identity politics” would be shut out from having one of its aspirants being able to seek the Presidency any earlier than 2028.  If Biden wins with Harris as VP, and Harris runs and wins in 2024, she would run again as the incumbent in 2028, meaning no other Presidential aspirant from the Democrat Party could seek the office until 2032 without first challenging Harris.

Twelve years is a long time for the Marxist left-wing of the Democrat Party to be asked to wait before visiting a socialist revolution on the US government.

But why are her fellow Californians so opposed to her?

Because they know — as Brandon Morse points out — that Harris as VP would immediately begin to wrestle for control of the Executive Branch in an effort to make herself a “shadow President.”  Karen Bass, or another non-threatening VP, would mean that Congress — Pelosi and Schumer — would drive the policy agenda, with the White House expected to serve as a rubber stamp for whatever Pelosi and Schumer send over.   That is why Karen Bass rose so quickly as a legitimate contender for the VP slot — and why the Harris backers did what they needed to do in order to prevent Bass from being named this past weekend.

Finally, even if Biden were to lose, Harris as the VP candidate would be vaulted ahead to the front of the line for the 2024 race where the White House would be vacant.  She could use her influence as the Party’s nominee in 2020 to establish control over the DNC, and make an effort to choke off the ability of others to enter the 2024 race to challenge her.  Keeping her out of the VP slot — even if Biden loses — is necessary for other factions of the Party to have a level playing field with her when the next primary season rolls around.