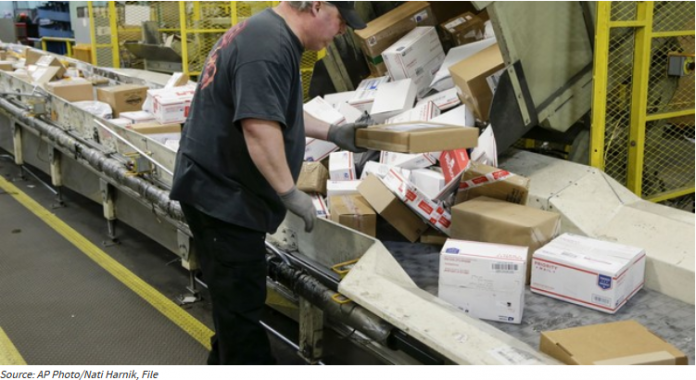 By Kurt Schlichter for Townhall

If you believe the mainstream media, Donald Trump is involved in a nefarious scheme to somehow make the USPS into something inefficient and incompetent, which comes close on the heels of his plot to make the sun start setting in the West. If that’s his plan, he already pulled it off decades before he first hit the cover of the New York Post. We conservatives think the president has done a lot of great stuff since humiliating Felonia Milhous von Pantsuit in 2016, but not even the most hardcore Trump Train engineer would go as far as Trump’s frothy pie-holed critics and credit the president with the mastery of time and space.

The correspondence conspiracy is pretty much liberal Q, except the eccentric Q folks at least like America.

And here’s a special shout-out to the Democrats pushing this intellectual fentanyl for deciding it is a good idea to choose the competence of the post office as their hill for the crusty crustacean’s campaign to die on. Please, continue pointing to the USPS as an example of what you’ll make the entire government into if we’re dumb enough to elect Gropey J. Good thinking, because if there’s anything that real people outside the MSNBCNN bubble love, it’s the post office. It’s the federal DMV, except with stamps.

The mainstream media is gobbling up and regurgitating this conspiracy theory all over its audience. The members of blue check Twitter, who last used the mail 10 years ago when Aunt Edna sent them a $10 check on their 13th birthday, is absolutely aghast. Or are they? As my new book The 21 Biggest Lies about Donald Trump (and You!) wonders, are they dumb, or do they just think you are?

Apparently, his plan is to somehow make it so the post office will be unable to deliver vote by mail ballots in order to prevent Democrats from winning the election that their senile old weirdo nominee is in the process of blowing. It might be interesting to examine the details of this conspiracy theory if there was even a coherent conspiracy theory to examine, but there’s not. It’s mostly “Trump bad!,” then low and undecipherable mumbling, then “And that’s how he will steal the election!”

The specifics of the alleged plot, to the extent you can identify them, are puzzling and elusive. What exactly is Trump going to do again? Is he going to order the mailmen to toss ballots in the shredder? Seems like it would be hard to pull off that flex with all those crack journalists out there. We are also told that he is rounding-up blue mailboxes from America’s street corners, and that this has been going on for a couple of decades is only further proof of his evil plan, somehow. What is not clear is how this might work in practice – so, the idea is that the Democrat voter comes home, ballot in hand, weeping because there are no blue mailboxes anymore to place his ballot into, and then he walks back inside his house past … his own mailbox? And then he just gives up? He sits at his dinner table, head in hands, sobbing at his inability to figure out how to drop a piece of correspondence into the postal system?

Now, that would be fine with me. I have no problem with you not voting if you are too stupid to mail a letter. Democracy then dies in dumbness.

Now, there is another alternative for those who can’t figure out how the mail works. You could, instead of walking those lonely streets in search of a rare blue receptacle, walk over to your local polling place on Election Day and vote like a normal person. That is a thing, you know. Ah, but the Can’t-Call-It-Chinese Chinese Coronavirus will kill us all if we go into a polling booth! Wait, I was told masks make you safe. Never mind. Hey, what if you are voting for someone woke, since wokeness seems to confer immunity to the flu? Regardless, feel free to go be around hundreds of other shouting people protesting that they have to go be around a few dozen other people who aren’t shouting down at their local precinct.

Of course, the whole idea behind vote by mail – the untargeted mass mailing of ballots out into the world that can be harvested by political operatives who all the best and smartest people tell us would never, ever cheat – is to make cheating easier. It’s to steal the election, and that’s why they are accusing Trump of cheating by trying to stop them from cheating. It’s an exercise in remarkable cynicism, but hey, they are, after all, our moral betters. We know because they never cease to tell us.

Also, underlying this bizarre and stupid conspiracy theory is more Democrat rent seeking for a beloved constituency. The postal workers’ union is a loyal Democrat adjunct and has naturally endorsed Grandpa Badfinger. Yeah, we’re supposed to trust the election to a bunch of partisan players for some reason – and the USPS is collapsing. It needs yet another bailout. Technology has changed how you correspond. You do it by email now. When was the last time you wrote a letter? You get paid electronically. Who gets a mailed Social Security check in 2020? The postal system, however, remains in many critical ways, essentially unchanged from a century ago. And that’s the way its participants and its Democrat patrons want it.

The Democrats, the party of the establishment and the establishment’s institutions, wants to keep the dying institutions they control on life support, operating as if this was still 1920 instead of 2020. Instead of a massive reform and rethink of the USPS for the 21st Century, they want another bailout. They want you to hand over money precisely so it need not change. The same is true with other institutions that remain locked in the past. Look at academia. Take away the man-bun and the babble about “cisnormative colonialist paradigms” and colleges are essentially unchanged from a century ago. It’s some guy at the front of a big room droning on to a bunch of hungover sophomores. Technology, however, means you can have the greatest teachers in the world in front of you for pennies via video, but the establishment Democrats again want you to subsidize the dying and expensive $70K a year college model, this time through you paying off outstanding student loans, and future ones too.

The real conspiracy is the Democrat establishment’s scheme to force you to pay to keep the teetering institutions it controls, like the post office and academia, on life support so that necessary change – which will disrupt those feeding at the institutional troughs – can be staved off for a few more decades. Democrats are the party of the status quo, the bloated, inefficient, parasitical status quo. They hate Trump, and you, precisely because Trump, and you, insist on upsetting their cushy arrangements.

So, as for Trump trying to destroy the Postal Service as currently constituted? We wish. 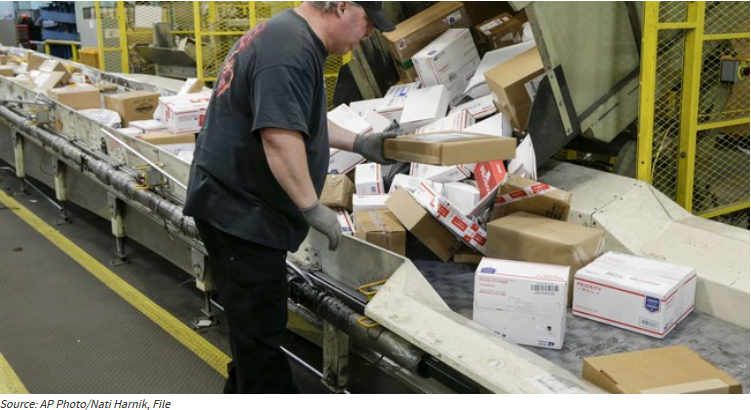