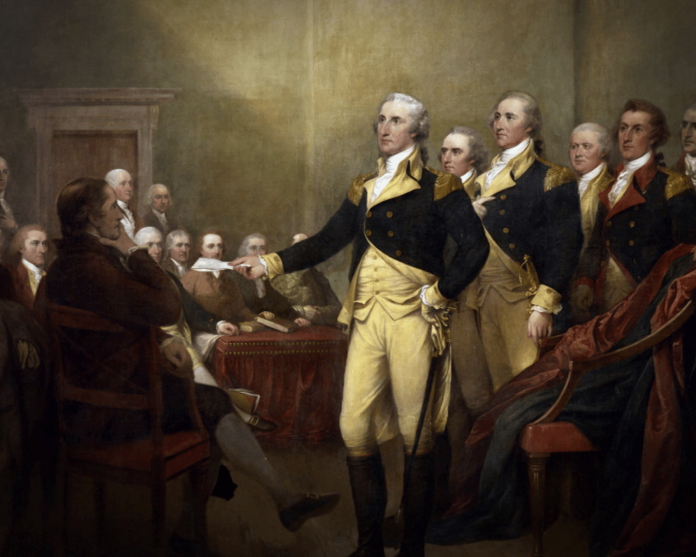 I cannot and will not accept the cries for democracy, as it will always make slaves of the people.  Our Founding Fathers did “Build Back Better,” after they defeated a tyrannical king and his gang of oligarchs. When we look back in our own country’s history, we can better know who we were as a people and how we were established as a nation

Benjamin Franklin, one of the oldest and wisest of our Founding Fathers, is credited with the statement, “Democracy is two wolves and a lamb voting on what to have for lunch.   Liberty is a well-armed lamb contesting the vote.”

We all know how the original vote in the scenario with the wolves outnumbering the lamb would have gone.  It doesn’t take a genius to figure that one out. It does however take a patriot who understands the value of Liberty to know the solution to keeping it. “There’s a certain enthusiasm in liberty, causing mankind to rise above itself in acts of bravery and heroism.”  Alexander Hamilton

… A Republic if you can keep it…

So, what exactly do they (the wolves in D.C.) mean when they scream “democracy?”  Why do they not speak out for and protect our Constitutional Republic?  The answer is simply, thewolves prefer democracy.

The elected-congressional wolves, who are “liars in state,” hold fast to their rhetoric about some threat against our democracy.  America’s media outlets all join them, including those who say they are conservative and constitutional.  I will accept the fact that they consider me to be a radical, for I believe in and will stand for the original foundation of this nation; “A Republic, if you can keep it,” Dr. Benjamin Franklin replied to Mrs. Powell when she asked, “Well Doctor, what kind of government do we have sir?”  He did not say, “A democracy; if you can bear it.”

Since the January 6 rally-gone-riotous, we’ve heard a lot of “save the democracy” speeches and screaming that if the Republicans win (by the way the Republicans say the same thing vice versa) that democracy will be dead forever in America.  To which I declare, “Long Live The Republic!”

I wish to bring up the question, “What exactly do these officials and their media pundits mean when they speak and preach about a threat to our democracy?”

Whose democracy do they want to save?  Ukraine’s? Russia’s? Mexico’s? Great Britain’s? Turkey’s? Afghanistan’s?

The definition of democracy: A system of government by the whole population or all the eligible members of a state, typically through elected representatives…  Control of an organization or group by the majority of its members.   All decisions and power reside in the voice of the majority. As a result, an individual, or group of individuals making up a minority, have no protection against the power exercised by the majority.  People commonly confuse direct democracy with representative democracy. The US officially has a representative style, though many mistakenly refer to the United States as a democracy.  In principle, all citizens have an equal say and are supposed to be treated equally. In practice it often allows for the tyranny of the majority over the minority. Individuals may make decisions for themselves except for any limitations imposed on individuals by a majority faction.

The definition of a republic: A republic refers specifically to a form of democracy in which elected individuals represent the citizen body and exercise power according to the rule of law under a constitution which protects the basic rights of individuals and the separation of powers with elected representatives.  All eligible citizens get equal say in decisions with protection of basic rights to individuals.  Yes—the written laws of the republic prevent the majority from taking away certain basic rights.  Freedom of religion is generally permitted, especially when there is a constitutional prevention (First Amendment) on interfering with freedom of religion and speech.

While these forms of government are similar, the difference is that the United States of America is a Constitutional Republic.   A Constitutional Republic limits the power of government and protects the rights of individuals and honors private property.   Putting it simply, “the wolves” (aka politicians) prefer a democracy so they can have their way with the lamb without restrictions or limitations.  Liberty does not come from democracy, for the lamb would have been subject to the mob of wolves. Liberty is when the lamb (We the People) has a contract (Constitution) with those elected to represent the lambs and are restricted from certain things, such as disarming them… and overtaxing them… and eating out their substance!  Grievance #10 of The Declaration of Independence:

“He has erected a multitude of New Offices, and sent hither swarms of Officers to harass our people and eat out their substance.”

Only in a Constitutional Republic are the rights of minorities (individuals) guarded and protected. “The smallest minority on earth is the individual. Those who deny individual rightscannot claim to be defenders of minorities.”  Ayn Rand

This nation was established as a Constitutional Republic; the elected and appointed bodies have been acting as if we were a democracy.

To know the difference and accept the truth is vital.  We the people have been fed the “democracy” line for so long, we have forgotten and forsaken that which was established to protect us.  In a democracy the legislative mob rules over the people and the elections are about popular vote.  The Declaration of Independence makes it very clear and differs with the theology of democracy, which has a large centralized government.

We hold these truths to be self-evident, that all men are created equal, that they are endowed by their Creator with certain unalienable Rights, that among these are Life, Liberty and the pursuit of Happiness. That to secure these rights, Governments are instituted among Men, deriving their just powers from the consent of the governed.

“We are now forming a republican government.  Real liberty is neither found in despotisms or the extremes of democracy, but in moderate governments.”  Alexander Hamilton

“The known propensity of a democracy is to licentiousness which the ambitious call, and ignorant believe to be liberty.”  Fisher Adams (1788)

“It has been observed, by an honorable gentleman, that a pure democracy if it were practicable, would be the most perfect government.  Experience has proved that no position in politics is more false than this.  The ancient democracies, in which the people themselves deliberated, never possessed one feature of good government.  Their very character was tyranny; their figure, deformity.  When they assembled, the field of debate presented an ungovernable mob, not only incapable of deliberation, but prepared for every enormity.” (1788) “…Our real disease…. Is democracy.”  (1740’s) Alexander Hamilton.

“A government deriving its energy from the will of the society…is the government for which philosophy has been searching, and humanity been fighting from the most remote ages.  Such are republican governments which it is the glory of America to have invented, and her unrivaled happiness to possess.”  James Madison (1792)

“In the strict sense of the term, a true democracy has never existed, and never will exist.”  Jean Jacques Rousseau 1762

“When once a Republic is corrupted, there is no possibility of remedying any of the growing evils but by removing the corruption and restoring its lost principles; every other correction is either useless or a new evil.” ~ Thomas Jefferson (date unknown)

We still hold dear the wisdom of these men of old and it is up to us, America (We The People) to know and understand exactly what has happened to our established form of government; our Constitutional Republic, and who is responsible.

It is my humble opinion that our Republic was hijacked by those who change the language regarding who we are as a nation; Republic turned democracy.   Jean Jacques Rousseau was correct; a democracy will never exist because it will quickly turn to an oligarchy, where a group of many will dictate over the multitude, while they themselves grow in power and profit tremendously along the way.

Remove the corruption and restore the lost principles of America!

Life, Liberty and the pursuit of happiness, property and prosperity.  We cannot restore without faith in our God.  “Our Constitution was made only for a moral and religious people. It is wholly inadequate to the government of any other.”  John Adams (1798)

Our First Amendment states:  Congress shall make no law respecting an establishment of religion, or prohibiting the free exercise thereof; or abridging the freedom of speech, or of the press; or the right of the people peaceably to assemble, and to petition the Government for a redress of grievances.

The lie of separation of church and state has been used to keep the faith of the people from being exercised freely.  We all know that the original intent was to keep the state out of the church and not vise versa.  However, it was used to distort our First Amendment, the state grasped our churches forcing them to have permits and licenses to function.  If the churches don’t comply, they will be taxed and their speech will be government regulated.

The wolves prefer a democracy and to increase their power over you, they must remove the belief in the God from the government and the schools.  Rule #7 from the book, Rules for Radicals, by Saul Alinsky makes this abundantly clear.

If we do not know and understand our past, which was our beginning as a nation, we cannot possibly understand what’s happening now and where we should go from here, to restore its lost principles of our Constitutional Republic.