Stop Supporting Companies That Hate You

By DeAnna Lorraine, The Washington Sentinel

Left-wing extremism has become commonplace in corporate America. It is almost impossible to avoid supporting these toxic ideas when shopping in your everyday life.

But to help you shop as responsibly as possible, I am showcasing some companies that haven’t caved to the far-left mob.

There are the ones that most patriotic Americans are aware of, like My Pillow and Goya who have directly stated support for President Donald Trump in a loud fashion. My Pillow in particular has shown how a company should respond to the insanity of the left, with their founder Mike Lindell loudly supporting President Donald Trump, and continuing to air ads on Tucker Carlson Tonight in the face of left-wing boycotts.

Both Goya and My Pillow are proof that patriotism is profitable, with their support of Trump resulting in big sales for their companies.

So if you are ever in need of pillows, or some good Spanish food products (Goya beans are fantastic), you know exactly where to go.

When it comes to media, things become tricky. While much of Fox News has turned on President Donald Trump, they at least are known to air real news with hosts like Tucker Carlson, Sean Hannity, and Laura Ingraham, who aren’t afraid to stand up against the mob.

But when you want real news all the time, One America News Network (OANN) is the real deal. It is highly recommended, and a refreshing change of pace. I am also hosting a show with Infowars, titled Election 2020 Countdown/Taking Back America leading into the November election, which can be watched here.

Sorry Fake News, it’s all on tape. I banned China long before people spoke up. Thank you @OANN https://t.co/d40JQkUZg5

When it comes to print media, you can of course count on us here at The Washington Sentinel, but there are other great sources one can rely on, like Breitbart News, the New York Post, the Gateway Pundit, and up-and-coming networks that have grown out of the Trump-era like The National Pulse, Big League Politics, and American Greatness.

And when it comes to entertainment, things get even harder for consumers. While Hollywood, and most of the major sports leagues have gone all-out for radical groups like Black Lives Matter, patriots at least have the UFC and WWE, which have not caved.

Eating out is another place that is difficult not to support the left. The best solution to this is to eat at local family-owned businesses, but when in a crunch, In-N-Outhas long been a great fast-food choice for those who have one nearby.

For those times when you need a little bit of caffeine to get going, there are some great choices. At the store, Red Bull is proven to be the best choice. Red Bull CEO recently fired a number of top executives after they tried to bring wokeness to their company in response to his refusal to support Black Lives Matter.

If you prefer making coffee at home, there are companies like Covfefe and Black Rifle Coffee who also refuse to give into the left.

For the times you aren’t in the mood for caffeine, and instead want a drink or two, the best beers for patriots come from Coors and Yuengling, which both have supported President Trump.

A big problem with companies today is the use of illegal immigrant labor. Tysonfoods was one of the first to stop this problem in its tracks, partnering with ICE in 2011 to ensure they were only hiring American citizens through E-Verify. ULinesimilarly avoids the hiring of illegal immigrants to produce their shipping supplies, and their founders have been vocal Trump supporters, similarly to the founders of companies like Nathan’s Famous Hotdogs.

Perhaps the most difficult place for conservatives is Big Tech companies. Google, Facebook, and Twitter not only censor conservatives, they are known to steal your data, and to work to appease regressive world regimes like in China.

Thankfully, there are alternatives. For those wanting to ditch Twitter, Parler is the growing go-to place where voices are not censored. Gab.com has also been around for years, and proven to be a safe place for those wanting to speak freely.

If you truly want to use a search engine without being tracked, or facing results that have been skewed to support the left, Yippy.com is the best, hands down. They present the results in a completely unbiased way, and never track you. The way they are set up, it isn’t even possible for them to do so if they wanted.

I would be remiss not to mention places to pick up pro-Trump, and conservative gear. There are many companies hopping onto the trend of creating pro-Trump merchandise just to make a buck. Republican Legion is by far the most trusted site to buy conservative merchandise. Many of their profits are used to support conservative causes, and their prices are unbeatable.

And while this is a good list to go on. There is one company that many Christians and pro-Trump Americans support, despite them being nothing more than a snake in the grass.

Chick-fil-A was founded as a Christian company, and stayed under that mission until shortly after the passing of their founder  S. Truett Cathy. Since then, they have stopped giving money to Christian organizations, and instead have given to left-wing hate groups like the Southern Poverty Law Center, who use their massive coffers to attack Christian organizations. 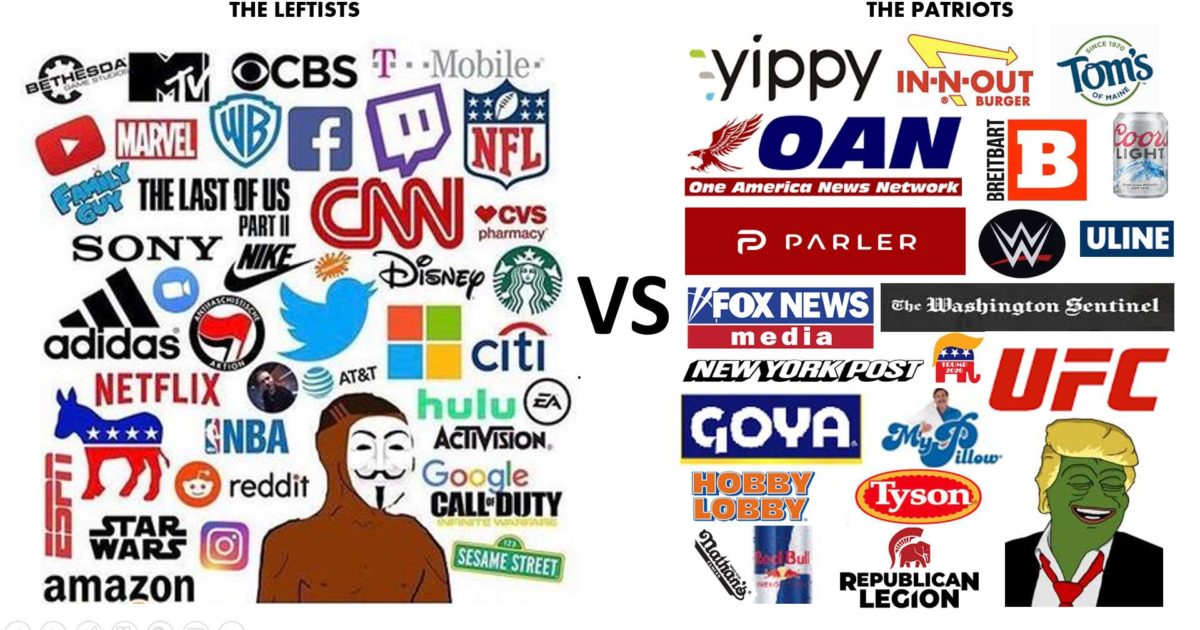