By Brandon Morse for Red State

Despite Joe Biden being the presumptive nominee and overcoming all other Democrats, he hasn’t really had a very solid approach to his campaign. How he plans to take on President Donald Trump has so far been nebulous and all he’s done thus far is hide in the basement and randomly gaffe in front of a camera.

Not exactly a winning campaign strategy.

On Thursday, Biden and Harris put on a little press conference of their own after the COVID-19 updates, and it’s here that Biden stood in front of a line of American flags and called for a national mandate to wear facemasks. Biden said it would be estimated to save over 40,000 lives over the next few months. He then passed the microphone to Harris. 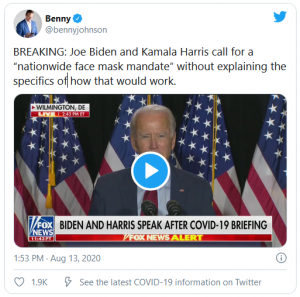 After taking the stage, Harris said that what Biden just did is what real leadership looks like.

And there it is, a look into what could possibly be Biden’s entire strategy.

Biden isn’t going to defeat Trump on the debate stage and I’m not exactly confident in Harris’s chances against Pence either. The debate is probably going to be one of the things that bring the Democrats down as it does with almost any and all things but the one thing Democrats are good at is fantasy.

Look at the scene.

Biden is speaking about national mandates about wearing a mask to keep thousands of people safe. He has no power to institute said mandate, not just because he’s not the president but because the president doesn’t have the power to do that. To be fair, he did say “let’s institute” but that will go missed by quite a few Americans.

As he says this, he’s standing in front of a line of American flags like a president would. Chyrons fly beneath him giving the impression that this is an announcement from the president.

It’s play-acting for the benefit of voters. The idea isn’t to debate Trump, it’s to show you what it would look like if Biden was in charge. While it may sound a bit weird, it may do well with the populace.

It’s easy to criticize Trump from a position where none of the announcements and decisions you make matter. If Trump screws up, the Democrats can easily say that’s because they didn’t do what Biden would have done in that situation. Biden then looks all the more presidential and capable.

We’re also seeing another pattern emerge that speaks volumes about the capabilities of their chosen candidate.

Biden acts like a President, then Kamala comes out afterward as his hype man to finish off strong…then both of them leave without taking questions. This is now the second time they’ve made an appearance without taking questions. That may change in the near future but it would appear that they’re still playing things incredibly close to the chest, i.e. not letting Joe Biden do anything that involves going off-script.

It sounds like a cheap and underhanded strategy, and it is, but it’s not crazy.

Biden can’t be trusted to say anything intelligent unless he’s reading it off the paper in front of him, so in order to make him seem viable, all they have to do is wait for something bad to happen and blame Trump for it while saying they would have done something differently.

These Alinskyite plays they’re making aren’t exactly without their unusually high success rate. If Trump’s team wants to make the best of this, they should try to get Biden out into the open to speak off-script as possible and constantly ask why the former VP isn’t answering any questions. Harris answering questions shouldn’t satisfy the answer giving requirements.

IF I WERE LADY LIBERTY©

by Beth Ann If I were Lady Liberty, I’d shine God’s Light upon this land, So that all the children in this world Would know and understand…   Freedom isn’t...
Read more
Uncategorized

By Jordan Davidson, The Federalist Three Supreme Court Justices, including Ruth Bader Ginsburg, who passed away on Friday due to complications of metastatic pancreatic cancer,...
Read more
Election 2020

By Jack Phillips for The Epoch Times President Donald Trump on Wednesday attempted to cast himself as the “law and order” candidate by asserting the...
Read more