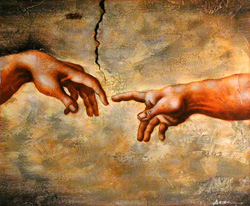 America is no longer at a crossroads; we’re standing on the edge of a cliff, facing a dark and dangerous abyss!

I’ve been saying for several years now that America is at a crossroads but what we’re going through isn’t the crossing of roads, it’s the destruction of who America is and what we won during our Revolution against a tyrannical king!  We’re no longer politically debating different ways to the same outcome, nor are we striving to preserve liberty while writing new laws and policies; today’s political differences goes all around and way beyond our U.S. Constitution.  Today’s politicians have thrown out any and all pretenses of preserving and protecting the Constitutional Republic.  In fact, most fail to even say the word Republic and have replaced it with the word democracy; a form of government known as ‘mob rule’ wherein minorities are overruled.  Even many of our so-called conservative news and media outlets are using democracy over Republic… such a blatant and misleading phrase.

We’ve watched two unconventional political conventions and besides being another ‘new normal’ in our world, they were as different as night and day.

I have relatives and friends who are Democrats.  Why? I cannot say; other than the fact that their parents or grandparents were Democrats.  I can honestly say the same of Republicans, who are labeled such, just because…  I think of myself as an Independent; until 2016 I never voted a straight ticket.

The so-called “progressive” left, have brought us to the edge of a cliff not a crossroads.  If we continue; if we take that last step forward, it will not be progress, instead, we will quickly fall into that dark and dangerous abyss of socialism.

This abyss will be the new dark America that defends and upholds communism, stands for a godless society, where there is NO Hope – No Life – No Liberty! And you can forget about pursuing your dreams, those will be decided by your “new little-g god government.”  Women’s rights will be forgotten, after all there is no difference in men and women under this “new” America, and free men will be slaves!  A world with no God has no hope; it is a dark and dismal place that has the stench of poverty, death and slavery for its citizens.

Do you think I’m exaggerating?

During the Democrat Convention in 2012 they booed God and removed Him from the platform…  During the 2020 convention they made a blatant display of removing “under God” from the pledge of allegiance; you see God has rules, and socialists see themselves as the rule makers for We the People; God’s rules or laws, do not fit their narrative.

I used to say that both the Democrat Party and the Republican Party politicians if thrown in a paper bag, shook up and dumped out, you couldn’t tell the difference….  BUT then along comes Donald Trump!  With this ‘new Republican’ on the scene, many of the old established Republicans have been exposed; we call them RINOS.  They are globalists and are more concerned about “people of the world” than their own constituents at home. The remaining Republican politicians, who haven’t gone to the dark side, (at least not openly) are making a stand with President Trump.

You see, in a socialist-communist-democrat America, God does not fit the narrative.  Government is god and you have no need of any other faith.

Because of President Donald Trump, the difference between the two political parties is like day and night.  The Democrats are doing their utmost best to remove God yet while they pretend that they believe in God.  They can’t have it both ways.  During the Democrat Convention, I heard talk of faith but not necessarily in God.  When scolding and blaming President Trump for Covid-19 (the China Virus) Joe Biden said “there is no miracle coming!”  In other words, elect Biden and Covid-19 (the China Virus) will go away because his health care for all, socialist government will take care of it and make it legislatively and politically go away.

The Democrats point out (in their opinion) all that is bad about America. The left is against Free Speech and Freedom of Religion; they view both as bigoted and unnecessary.  They destroy and distort history, remove any pride of country and break the spirit of Americans. WHY? So that you will be willing pawns in their dark abyss of socialism.  Socialism takes away all that you have so that you will need the government to take care of you.

For the first time in my recollection the truth was told!  Abby Johnson – told the truth about Planned Parenthood.  Have you ever asked yourself WHY is abortion so important to the Democrats?  And WHY must it be paid for by the government using your TAX dollars???

Margaret Sanger, a well-known white supremacy activist, is the founder of Planned Parenthood. She is admired by Hillary Clinton and esteemed by the Democrat Party.  Knowing this, you must conclude that the Democrat Party is NOT the party that supports equal rights, they support racism and death.

On the last night of the Republican Convention, there was a tribute to women, focusing on the 100th anniversary of Amendment 19: Constitutionally recognizing the women’s right to vote!  YET the Democrats, who claim they are the party of women, continually dehumanize any woman who dares to think independently of their policies, they dehumanize all life with their continual support of abortion; the murdering of the unborn and now they’ve gone to infanticide.  If a female is prolife, profamily, or a strong woman of Christian faith, the Democrat Party ridicules and demeans them as individuals.

Our Founding Fathers fought for Independence.  They believed in WE THE PEOPLE, but we’ve allowed government to grow into a legislative, regulative, mandating monster that will take all you have, then turn around and argue over giving you a stimulus check.  They will spend your money on healthcare for all – FREE healthcare for illegal aliens – free education – reparations.  Their Green New Deal is sure to give you higher energy costs and in turn, COLD HOUSES IN THE WINTER AND HOT HOUSES IN THE SUMMER.    Independence as a nation and as individuals will be gone… The Democrat Party is OK with the U.S. dependency on China.

THE DARK ABYSS OF NO GOD!

I have a great fear of heights and I have a greater fear of the dark and godless abyss America is now facing.  I’m doing everything I know to do to preserve our American Liberty and awaken the Republic; We the People!

November 3rd, 2020 is Election Day!  Will America take that step forward, falling into the dark and godless abyss, or will Americans stand their ground and Bring America Home© and begin the restoration of our great Republic?

My favorite Founding Father quote for this election year

Thomas Jefferson once stated, “When once a Republic is corrupted, there is no possibility of remedying any of the growing evils but by removing the corruption and restoring its lost principles; every other correction is either useless or a new evil.”

I used to believe a vote for the lesser of two evils is still evil; while this may be true… I have come to the conclusion we cannot win this nation back or restore our Republic by way of voting 3rd party.   My recommendation is that we VOTE OUT every Democrat; from dog catcher to senator, and then our elected Republicans cannot hide behind their Democrat colleagues.  Even with this, it is still up to We the People to hold them accountable!

Don’t let America fall!  We are standing on the edge of that cliff, one step forward is NOT progress but a fateful fall into a dark, dismal and dangerous abyss.

God’s rules or laws, do not fit the Democrat-Socialist narrative!

Take a coffee break with Beth Ann each weekday morning

Or meet Beth Ann in the Parler @BethAnnCSCTalkRadio

As the year comes to a close there is still much consternation and uncertainty in our country as to the survival of the Republic...
Read more
New Territory Media

America, my dear sweet America, We the People from you have strayed. We’ve wasted our liberties and spoiled our prosperity, and now we live as slaves. We’ve...
Read more