If FBI Director Christopher Wray doesn’t turn over all information about the laptop alleged to belong to Hunter Biden that’s been requested by Senate Homeland Security Chairman Ron Johnson (R-Wis.) within 24 hours, Wray should be summarily fired by the president and be replaced by an acting FBI director who will do the job, someone like Richard Grenell.

That Wray and company have been sitting on this evidence since 2019 is beyond unconscionable.

That they were doing it during an impeachment trial relevant to the details on that laptop’s hard drive borders on the criminal, indeed crossing that border morally, if not legally.

The FBI has been living under a cloud for years now because of the demonstrably politically tainted Mueller investigation into Trump–Russia collusion that never existed, as well as the related attempt to frame Michael Flynn. (The 302s that made this clear had to be forced out of the FBI with a metaphorical bunker-buster.)

This is an untenable situation for a democratic republic going forward—if it wishes to remain either democratic or a republic.

Wray has done nothing to alleviate this. To the contrary, he’s continually stonewalled congressional requests as if he were a Soviet apparatchik, not the servant of the American people that he supposedly is.

He seems to want us to believe he is working to preserve his institution, but is actually doing the reverse—making us all the more suspicious.

Hunkered down and undoubtedly praying for the election of Joe Biden to save his own career, Wray has acted out of extreme selfishness or ideological bias or both.

The Biden Laptop Affair should be the proverbial straw that breaks the camel’s back.

Only it’s not a straw, far from it. Contained in this email exchange and on the hard drive from whence it comes are potential links to corruption the likes of which we haven’t seen in our country, a degree of cooperation with communist China that could lead, if unchecked, to massive changes in our lives.

We also may learn if the Biden family really is a crime family akin to the Corleones or just the normal political hustlers that have been profiteering off public office as long as any of us have been alive—the kind that makes $8 million book deals and pretends to be “just plain folks.”

Even if the Bidens are only consuming narcotics, not selling them, because of the China and Russia connections—evidently more real than any of those repeatedly ascribed to Trump—La Famiglia Biden may be ultimately more dangerous than the Corleones who, although fictional, had their real-life equivalents.

It’s imperative we know more about this before electing Joe Biden. Is it the usual cheesy corruption or is it something more? The Chinese undoubtedly know a lot about the former vice president’s activities that we don’t, but what?

If the “big guy” of the emails is Joe—and for the moment, that seems more than likely—just how far would this “big guy” go for his own ends? And does he have the mental capacity at this point even to understand the implications of his actions?

The hard drive may have some, though unfortunately not all, the answers. Even if Wray coughs up some or all the information, there is scant time before the election to follow it up.

But that doesn’t mean we shouldn’t. And if Biden wins in November, this should still be investigated until he takes office.

You can bet that Wray, the stonewaller, wouldn’t do to that. That is why, above all, he must go. 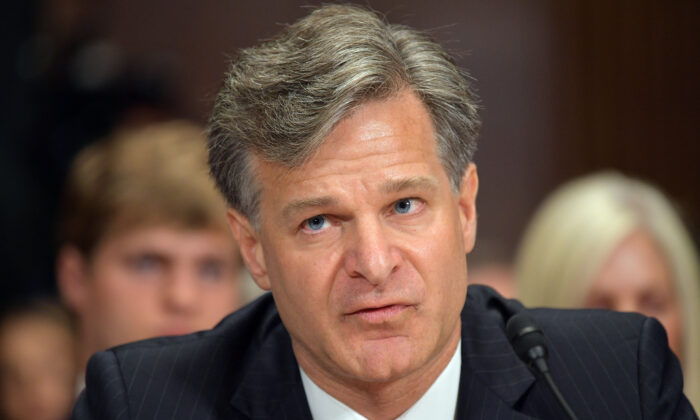