By Emma-Jo Morris and Gabrielle Fonrouge for New York Post

Hunter Biden pursued lucrative deals involving China’s largest private energy company — including one that he said would be “interesting for me and my family,” emails obtained by The Post show.

One email sent to Biden on May 13, 2017, with the subject line “Expectations,” included details of “remuneration packages” for six people involved in an unspecified business venture.

Biden was identified as “Chair / Vice Chair depending on agreement with CEFC,” an apparent reference to the former Shanghai-based conglomerate CEFC China Energy Co.

His pay was pegged at “850” and the email also noted that “Hunter has some office expectations he will elaborate.”

In addition, the email outlined a “provisional agreement” under which 80 percent of the “equity,” or shares in the new company, would be split equally among four people whose initials correspond to the sender and three recipients, with “H” apparently referring to Biden. 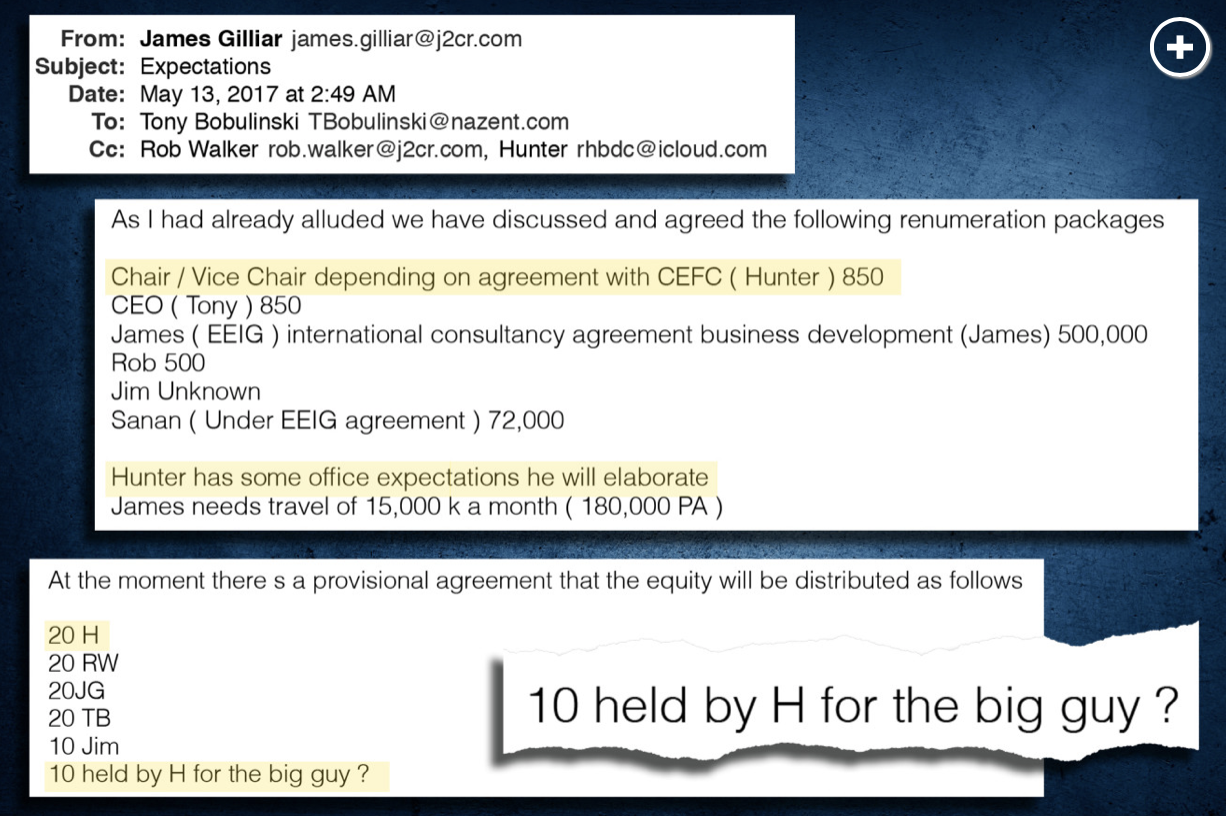 Neither Jim nor the “big guy” was identified further.

The email’s author, James Gilliar of the international consulting firm J2cR, also noted, “I am happy to raise any detail with Zang if there is [sic] shortfalls ?”

“Zang” is an apparent reference to Zang Jian Jun, the former executive director of CEFC China.

The email is contained in a trove of data that the owner of a computer repair shop in Delaware said was recovered from a MacBook Pro laptop that was dropped off in April 2019 and never retrieved.

The computer was seized by the FBI, and a copy of its contents made by the shop owner shared with The Post this week by former Mayor Rudy ­Giuliani. 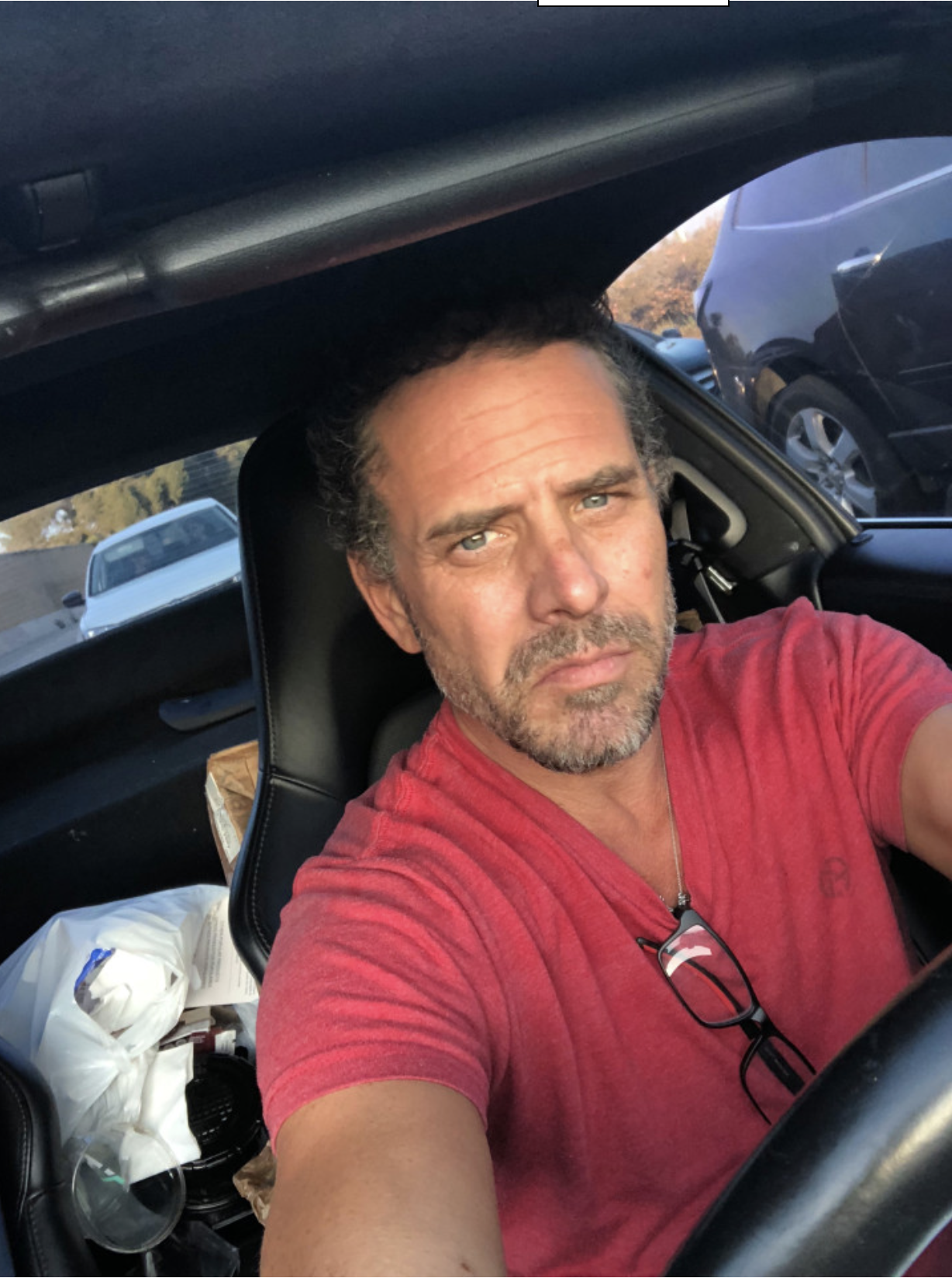 Another email — sent by Biden as part of an Aug. 2, 2017, chain — involved a deal he struck with the since-vanished chairman of CEFC, Ye Jianming, for half-ownership of a holding company that was expected to provide Biden with more than $10 million a year.

Ye, who had ties to the Chinese military and intelligence service, hasn’t been seen since being taken into custody by Chinese authorities in early 2018, and CEFC went bankrupt earlier this year, according to reports.

Biden wrote that Ye had sweetened the terms of an earlier, three-year consulting contract with CEFC that was to pay him $10 million annually “for introductions alone.”

“The chairman changed that deal after we me[t] in MIAMI TO A MUCH MORE LASTING AND LUCRATIVE ARRANGEMENT to create a holding company 50% percent [sic] owned by ME and 50% owned by him,” Biden wrote. 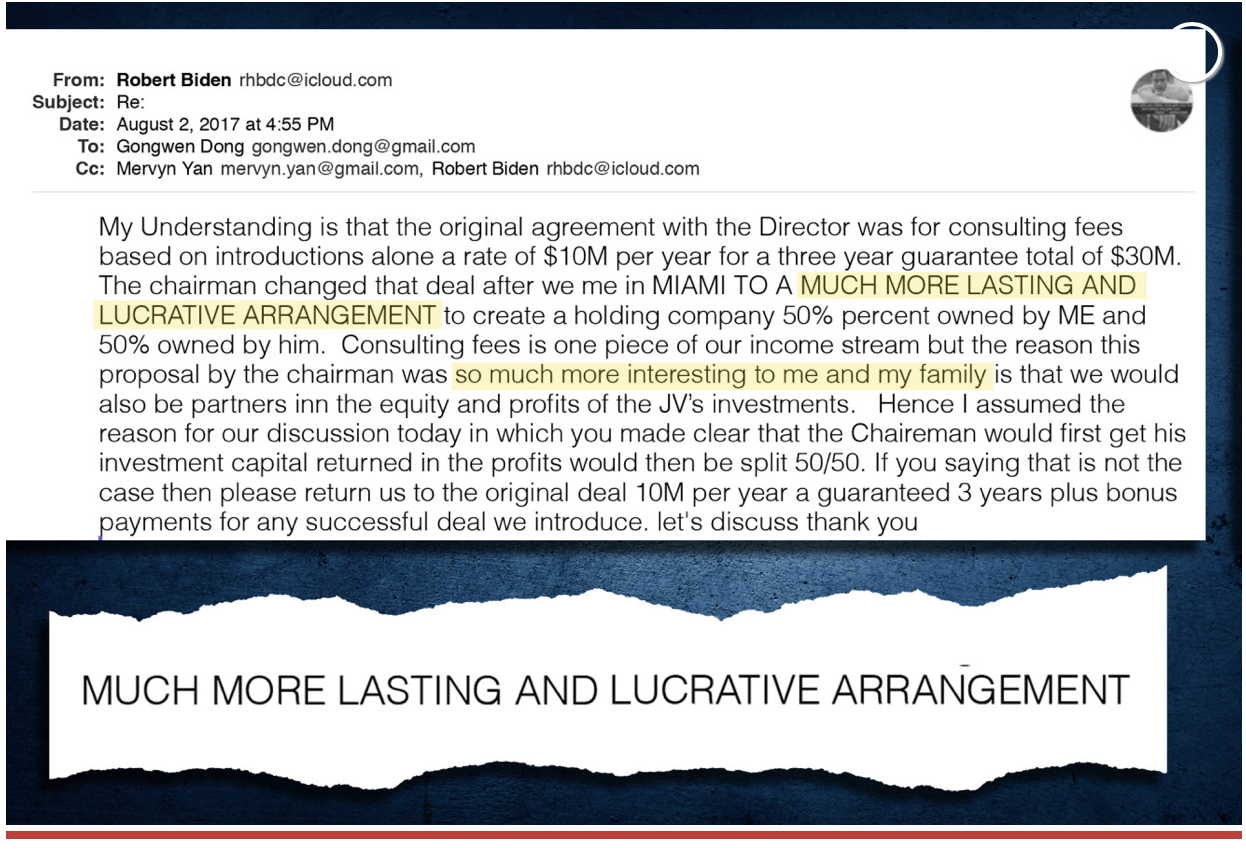 “Consulting fees is one piece of our income stream but the reason this proposal by the chairman was so much more interesting to me and my family is that we would also be partners inn [sic] the equity and profits of the JV’s [joint venture’s] investments.”

A photo dated Aug. 1, 2017, shows a handwritten flowchart of the ownership of “Hudson West” split 50/50 between two entities ultimately controlled by Hunter Biden and someone identified as “Chairman.” 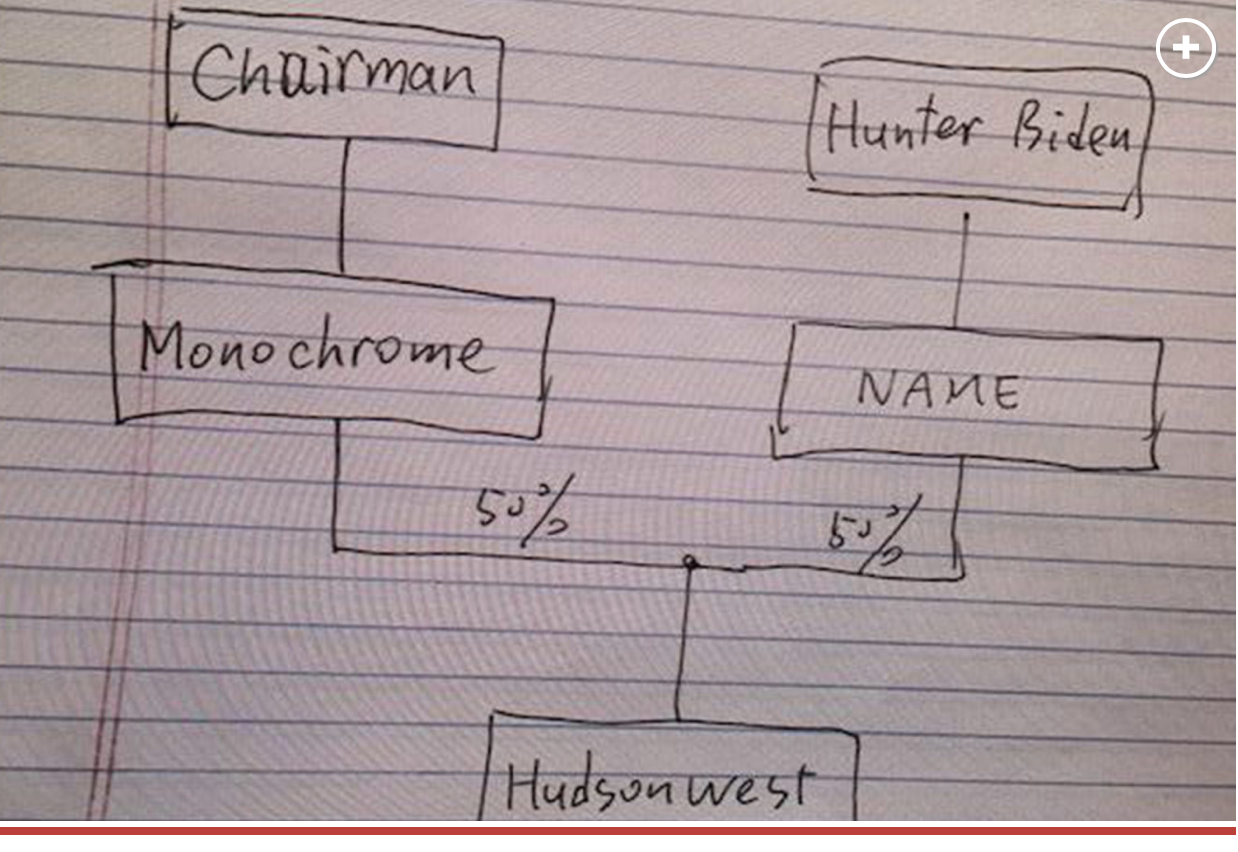 Credit cards issued against the account were used by Hunter, his uncle James Biden and James’ wife, Sara Biden, to purchase more than $100,000 “worth of extravagant items, including airline tickets and multiple items at Apple Inc. stores, pharmacies, hotels and restaurants,” the report said.

The company has since been dissolved, and Hunter Biden’s law firm, Owasco PC, was one of two owners, according to the report.

Biden’s email was sent to Gongwen Dong, whom the Wall Street Journal in October 2018 tied to the purchase by Ye-linked companies of two luxury Manhattan apartments that cost a total on $83 million.

Dong, who owns a sprawling mansion in Great Neck, LI, has been identified in reports as CFO of the Kam Fei Group, an investment firm based in Hong Kong. 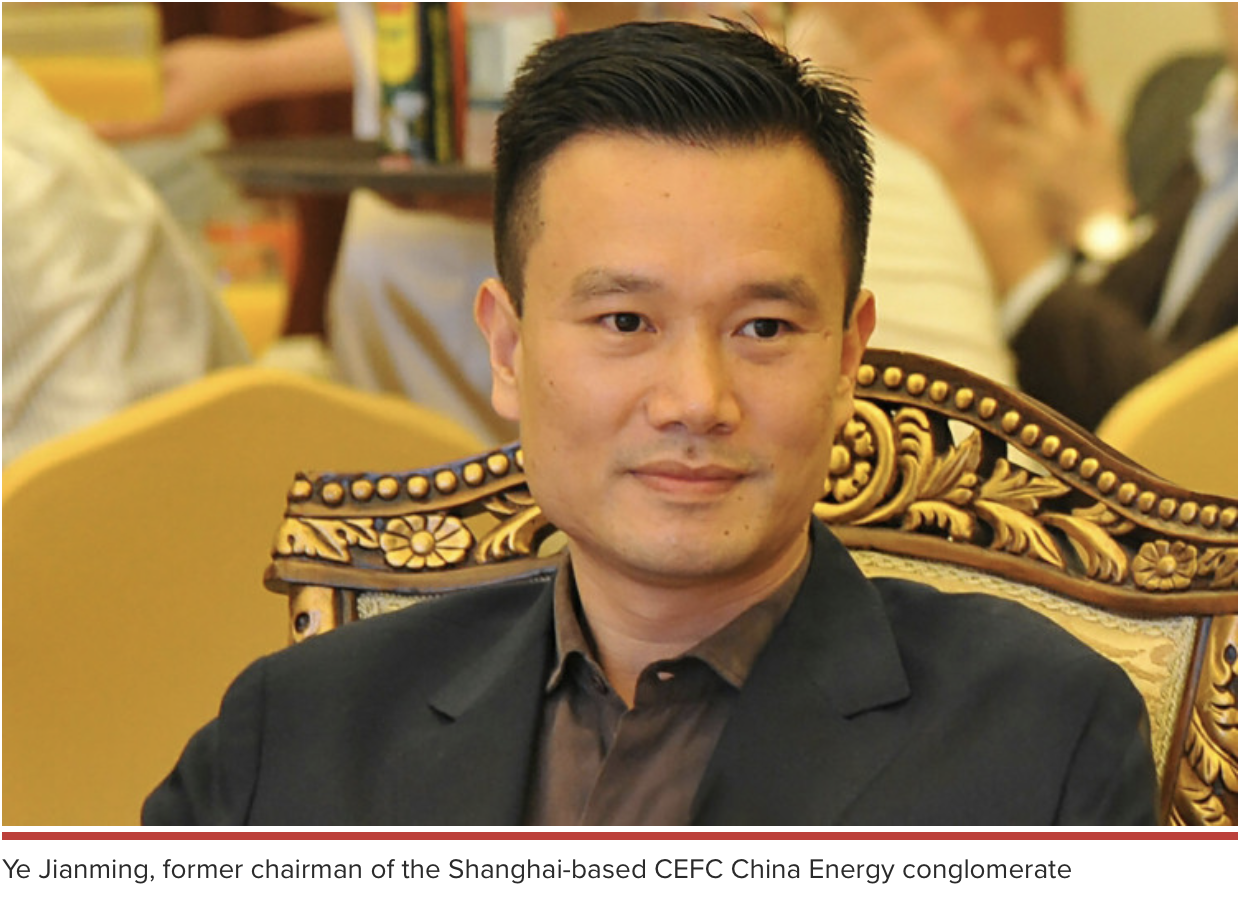 The documents obtained by The Post also include an “Attorney Engagement Letter” executed in September 2017 in which one of Ye’s top lieutenants, former Hong Kong government official Chi Ping Patrick Ho, agreed to pay Biden a $1 million retainer for “Counsel to matters related to US law and advice pertaining to the hiring and legal analysis of any US Law Firm or Lawyer.”

In December 2018, a Manhattan federal jury convicted Ho in two schemes to pay $3 million in bribes to high-ranking government officials in Africa for oil rights in Chad and lucrative business deals in Uganda. 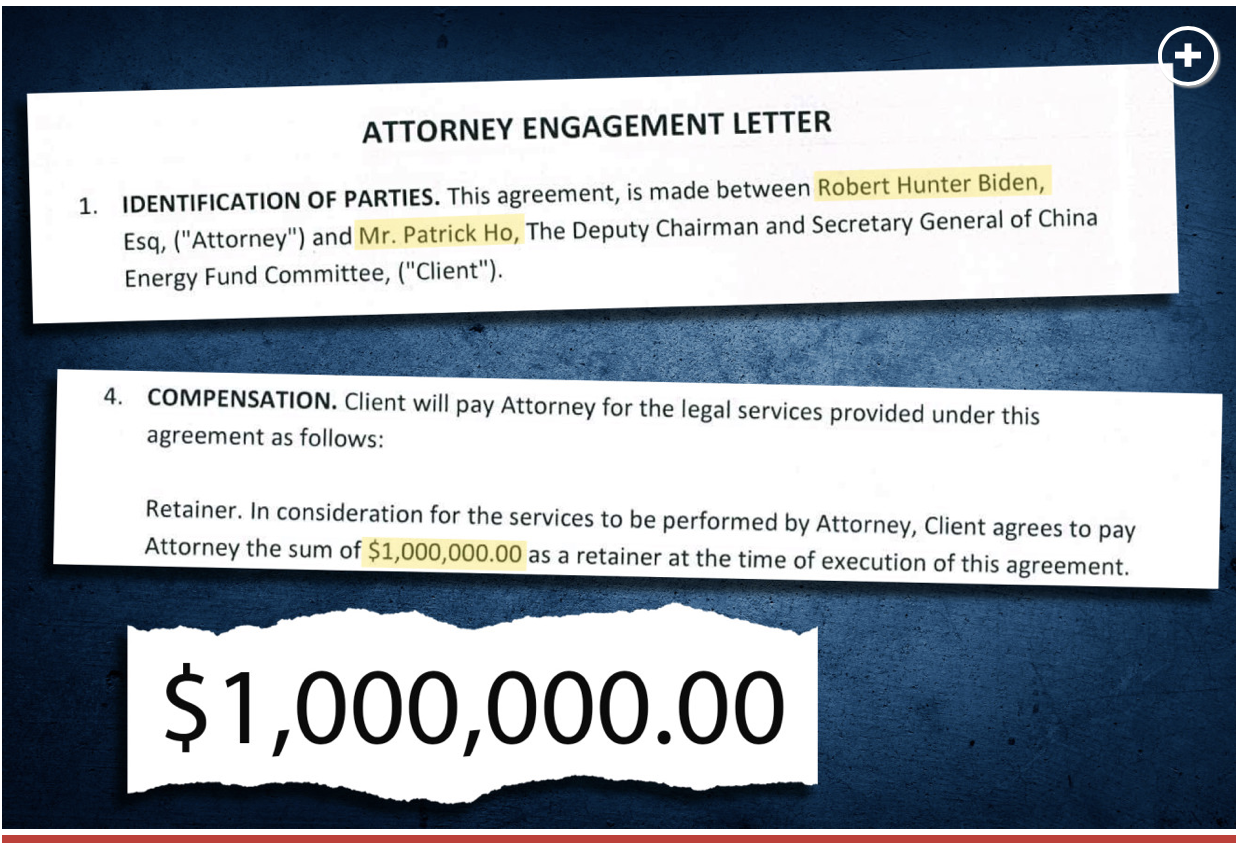 Ho served a three-year prison sentence and was deported to Hong Kong in June.

Neither Biden’s lawyer, the Joe Biden campaign, Gilliar, Dong nor Ho’s lawyers returned requests for comment, but Biden’s lawyer has previously said, “There is no need for comment on any so-called information provided by Rudy Giuliani.

“He has been pushing widely discredited conspiracy theories about the Biden family, openly relying on actors tied to Russian intelligence. His record of dishonesty in these matters speaks for itself,” lawyer George Mesires added. 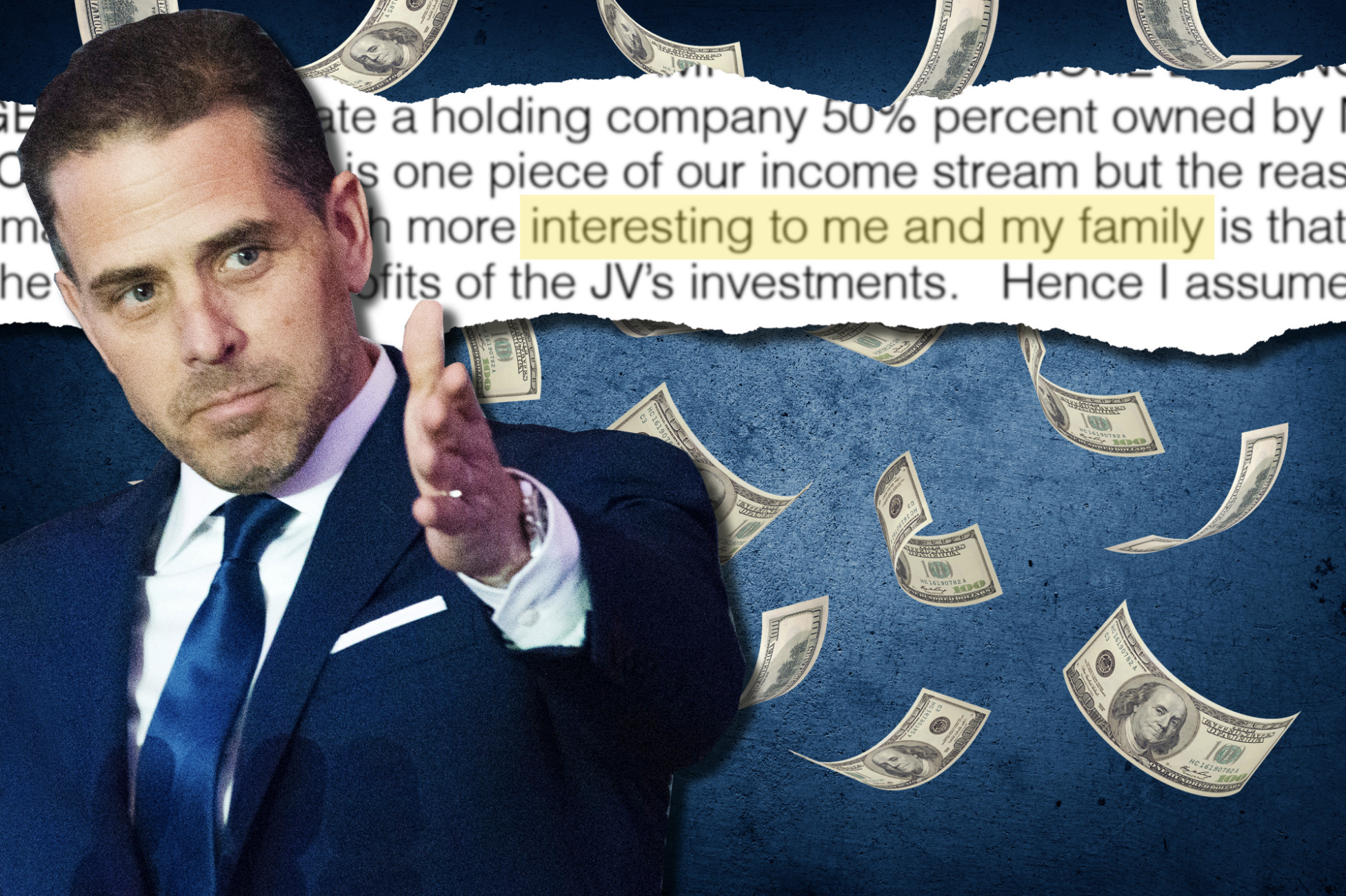