All of this behavior is making black people victims and gives the left permission to swoop in and be there as saviors.  These programs don’t educate or put an end to hate;  by design they create more hate, hate towards other races and hate towards America itself.  The freest and most diverse nation in the history of the world.  The consequences of this movement or undercurrent are horrific as witnessed by the summer of 2020.  The media doesn’t address certain attacks on individuals as racist i.e. Asians because they are segregated out by blacks because they don’t fit the narrative.

There are dozens of stories about black violence against Asians and whites but these stories never make the news.  Remember only white people can be racist.  A black man murders an Asian immigrant (Anton Watson) but the media focuses on white supremacy.  Incredibly in direct response to Watson’s murder of the Thai man, a protest was held in NYC against white nationalism.  So a black man murders an Asian immigrant and the media condemns white people.  Now according to CRT, Asians are discriminated against for being white adjacent because of their academic and economic success.  If you succeed in any way it is because you are an oppressor.  We don’t have a problem with white supremacy in America, we have a problem with violence period.

This is only being made by our politicians and media fueled from the left.  Studies show that murder rates soar dramatically in cities after BLM protests leading to an extra 6000 deaths nationwide far outpacing the number of police shootings per year.  Ultimately these racist messages lead to more attacks against the people they claim to protest, leading to black people murdering more black people.

In Democratic run cities like Chicago, young African American men make up over 97% of the city shooting and homicide victims (FBI Statistics).  Violence there is off the chart with more than 2200 shootings in the first 6 months of 2020 (FBI Statistics).  Over 75% of the victims are black but where is BLM.  They complain about police brutality, but in 2019 there were nearly 500 homicides in Chicago and just three involved the police.  The Democrats have convinced the black population that they are plagued by systemic racistism for votes.  The black people to whom they are giving this message to aren’t even aware that they are being conned (Larry Elder 2020).

Despite creating the exact policies that keep blacks suffering, Democrats like Joe Biden exploit that suffering for his own political gain, talking down to the blacks and defining them as traitors to their race if they don’t support the democratic oppressors.  Democrats claim there is systemic racisism built into the laws of this country that favors one race over another.

Atlanta based “Woke- Coke”  demands that the law firms it uses have 30% diversity among its attorneys with more people of color.  United Airlines is preparing to shake up the white male dominated pilot population.  They will be replacing them with pilots form minority groups.  Joe Biden and congress passed the American Rescue “as long as you are not white” Plan. 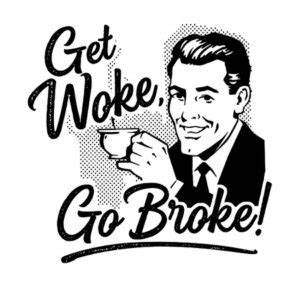