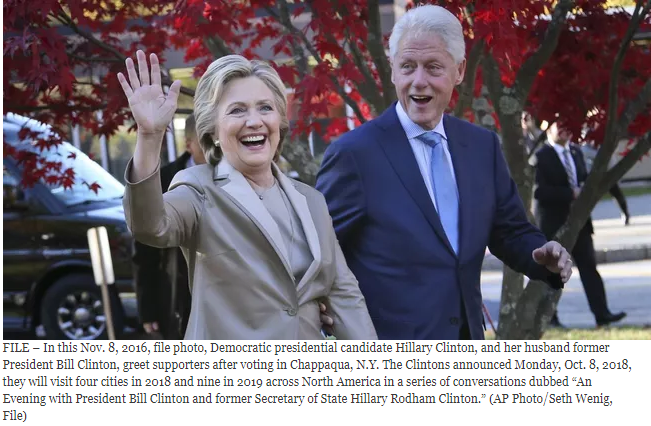 by Shipwreckedcrew for Red State

Late today, the District Court in the Southern District of New York unsealed several court documents that are part of the case file in civil cases filed against the Estate of Jeffrey Epstein and Ghislaine Maxwell by a young woman who claims she was a victim of sexual assault at the hands of Epstein, Maxwell, and many others.  Jeffrey Epstein was a convicted pedophile and successful suicide practitioner, while his ex-girlfriend Maxwell is now facing federal charges of sex trafficking in the Southern District of New York after her recent indictment.

Epstein was indicted in 2019 but hanged himself — allegedly — in his New York jail cell while awaiting trial.

The long history of this matter is beyond the scope of this article.  But the basics are that Epstein was a wealthy “financier” from New York who was investigated beginning in 2004 for engaging in sexual conduct with minor girls at various properties owned by him in New York, Florida, and a private island he owned in the Caribbean.  In 2008, Epstein pled guilty to state charges in Florida for procuring an underage girl for prostitution.  As part of that arrangement, the US Attorney for the Southern District of Florida agreed to a “Deferred Prosecution Agreement” (DPA) to resolve an indictment on similar charges that had been filed under seal by a Florida grand jury.  If Epstein successfully completed his sentence in the state case, the federal case would be dismissed without further proceedings.

There is nothing “ordinary” about the disposition of the federal case in Florida, and the details of that case are not well known beyond the reporting by the Miami Herald.  But one aspect of the DPA that no one connected to federal law enforcement that I know has ever seen done before is that it supposedly grants immunity to other individuals, including ANY unnamed “potential co-conspirators”.  Ghislaine Maxwell’s attorneys have publicly stated that they intend to assert the language of the DPA as a defense on her behalf in the federal indictment recently returned against her.

It is reported that Alan Dershowitz negotiated the terms of the DPA on Epstein’s behalf.

But I have yet to see anyone pose a serious legal argument for how unknown “potential co-conspirators” have any legal standing to assert a claim arising from the DPA on their own behalf.

The first young woman to sue both Epstein and Maxwell for the sexual abuse she suffered as minor was Virginia Roberts Giuffre, who brought suit in 2015.  Her suit was settled in 2017, and the case file was sealed, including discovery documents that were filed in connection with various motions in the case.  Among those documents were affidavits and the transcript of Giuffre’s deposition in which she named several individuals as having either engaged in sexual conduct with her when she was 17, or who she knew to be present at various Maxwell properties when young girls were brought to those properties for sexual purposes.

In the aftermath of the settlement, there has been much litigation over the sealing of the court file, and ultimately it was ordered that some documents in the file — approximately 2000 pages — would be unsealed.  That happened today.

Techno Fog, a tremendous practitioner of getting court documents online and in useable fashion, has made dozens of posts on Twitter today attaching individual pages, or excerpts of pages, from the documents, released.

These are just screen grabs of single pages.  There is little if any context for the information on the pages, or what they were used for.  Some look to be part of court filings such as motions, and others are transcripts.  Others are just documents that were likely filed as exhibits.

The documents make allegations that name very prominent people as having participated in Epstein’s illegal activity with underage girls.  None of this information has ever been tested in a court of law, and it’s quite possible that much of it could not be offered under the Rules of Evidence.

Further, many of these names have circulated in the press and on the internet for quite a while, and some of the individuals named have issued strong and vigorous denials of the allegations.

What follows are just a few screen grabs of documents that were released: 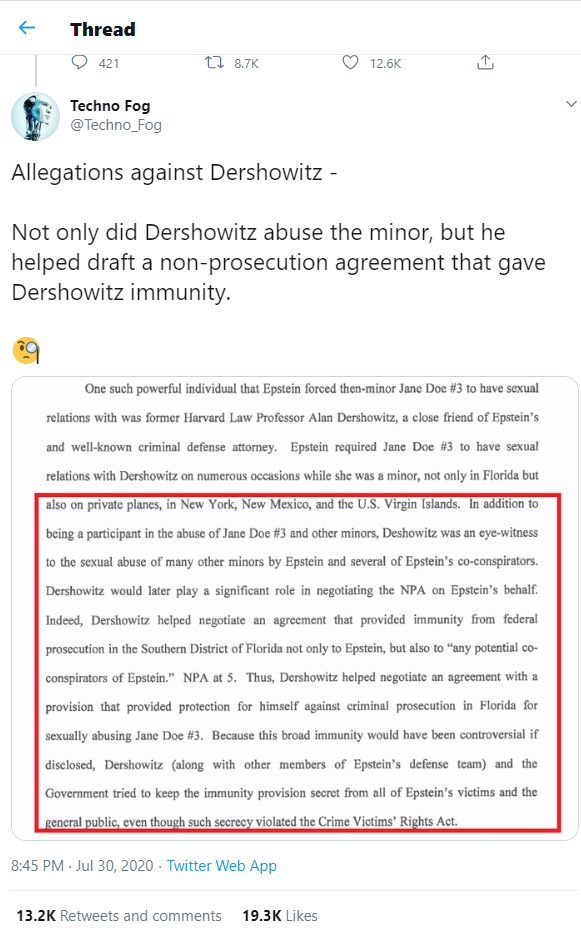 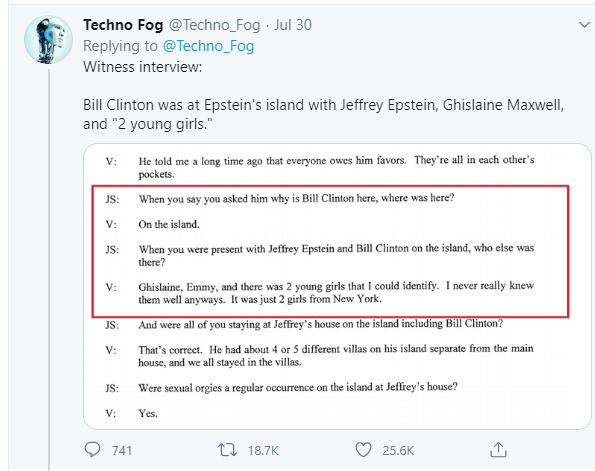 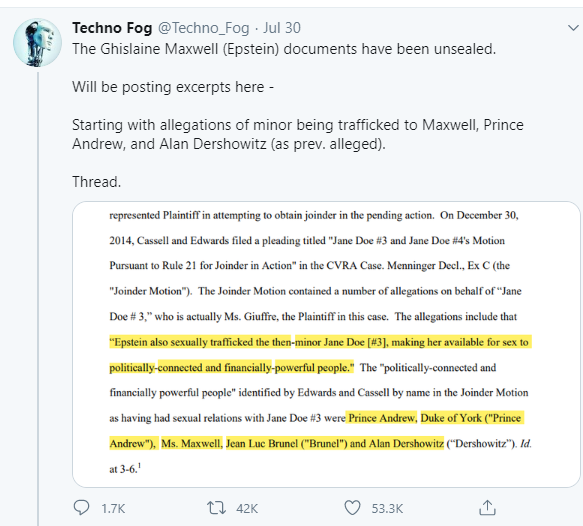 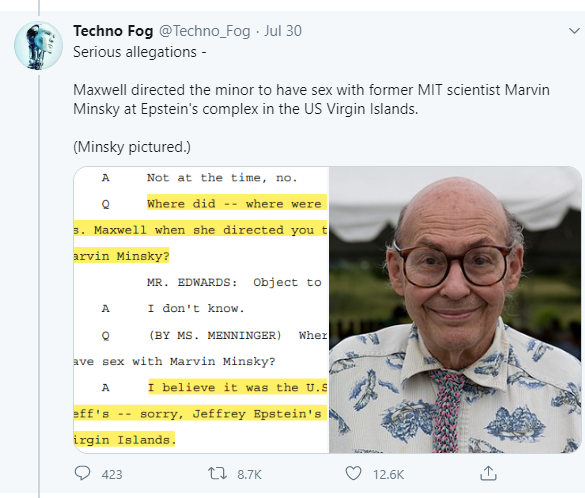 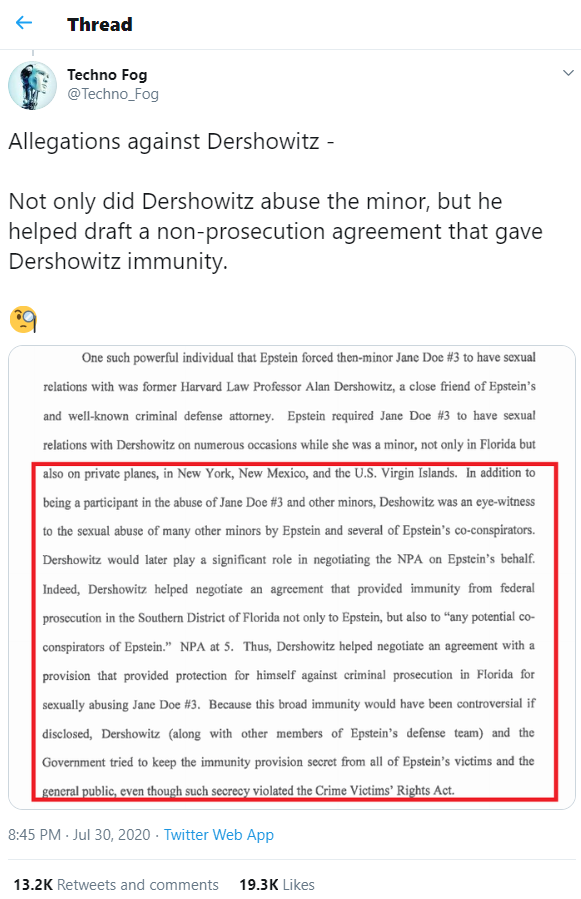 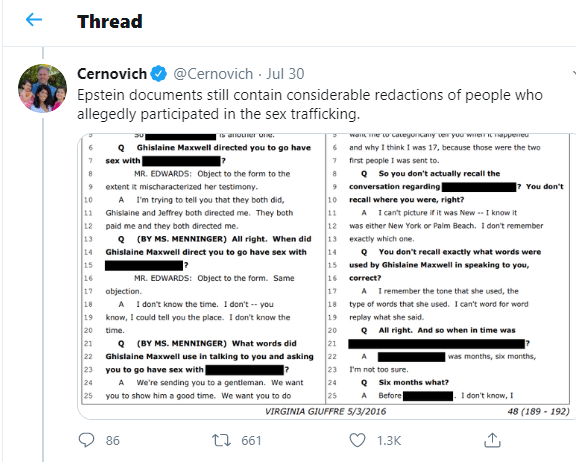 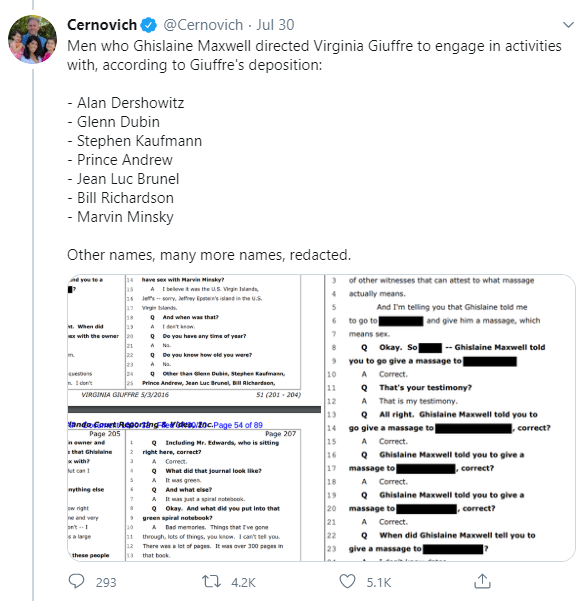 I’m sure there will be much more info put into public circulation in the days ahead, and better context will be available to draw conclusions from some of these allegations.