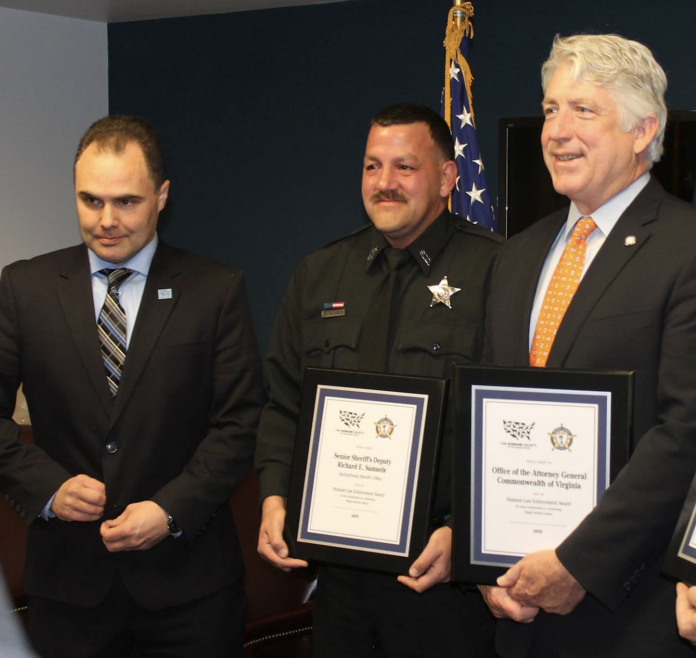 The Humane Society Legislative Fund (HSLF) – the political arm of the Humane Society of the United States (HSUS) – recently re-endorsed Mark Herring for Attorney General of Virginia. Virginians might want to reconsider voting for Herring this Novemeber in light of his over-zealous persecution (rather than prosecution) of some of their fellow citizens when it comes to animals.

Of particular note, Herring, who has been awarded multiple awards by the Humane Society of the United States (a deceptively named, radical animal rights organization) which launched the nation’s first Animal Law Unit within the Virginia attorney general’s office, giving prosecutors extraordinary powers.

Some of the cases pursued by the Animal Law Unit, often with some questionable legal twists, include harassment and indictment of the owner of a small private zoo; repeated harassment of the Natural Bridge Zoo; and most recently, charging a Winchester, Virginia, man with animal cruelty because he kept chickens that were allegedly being used for cockfighting.

In the Winchester, Virginia, case, Steve Ritter was in his 70s in November 2018. He and his wife were enjoying a cup of coffee at the breakfast table about 7:45 that morning when there was a banging on the door. It was 17 degrees Fahrenheit outside when Mr. Ritter opened the door to see strangers dressed in ninja-style garb, holding rifles. They took Mrs. Ritter outside and said they wanted to talk to Mr. Ritter for “15 minutes.” They sat him in a chair. At that time they did not present him with any warrant.

Mr. Ritter and his wife were questioned off and on in various rooms of their home until 4 pm that day. They were never allowed to see what was going on with their chickens. At that point a warrant was finally flung on a table in front of them. According to the warrant, law enforcement personnel were given authority to take all “fighting cocks” on the property. However, there were no fighting cocks on the property. The birds on the property were chickens. Some of them were brown laying hens belonging to Mrs. Ritter for producing eggs. Nevertheless, all of the birds were seized.

According to Mr. Ritter, when he was a younger man he had been involved with cockfighting but that was many years ago. That didn’t seem to register with the law enforcement personnel who raided his home and took his birds.

Asked about his questioning, Mr. Ritter said that one of the people in charge gestured to him that he (Mr. Ritter) was down here, at a low level. Law enforcement wanted someone up here, gesturing high above Mr. Ritter’s head. They seemed to believe that Mr. Ritter was part of some nefarious cockfighting gang, despite the fact that Mr. Ritter, 73 years old at the time, didn’t own any fighting cocks. This questioning went on for hours.

Not only did the agents take the Ritters’ birds but they searched the house and took personal mementos and collector’s items, some of which have never been returned. They never returned Mrs. Ritter’s iPads and cellphones, considering them to be “evidence.”

The investigators even led Mrs. Ritter into a room by herself and suggested that she could speak more freely if her husband wasn’t present. She asked them if they wanted to hear about her grandkids.

In order to push Mr. Ritter into giving up his birds, the agents told him that if he didn’t sign them over it would cost him $10 per bird/per day. This would add up to about $1600 per day. Mr. Ritter felt he couldn’t afford to pay these costs so he gave up his birds. He subsequently learned that the agents had lied to him.

Many of the birds were killed after they were seized. The rest were adopted without holding a probable cause hearing within 10 days.

According to Steve Ritter, he and his wife were never arrested. He was charged with 10 counts each of animal cruelty and possessing, selling, or training animals for fighting. The latter charges are felonies. The prosecution offered him a plea deal twice which Mr. Ritter refused.

Steve Ritter found out later that the entire case rested on a complaint made by someone who said that he might possibly be cockfighting and hoarding roosters. Following that local complaint, a county official for Frederick County visited his farm and told him that he hadn’t done anything wrong. That didn’t stop K. Michelle Welch, senior assistant attorney general and general director of the office’s Animal Law Unit, from acting.

From the time of the initial raid until a verdict was reached in the case, it took almost three years. During that time, Mr. Ritter suffered two heart attacks. The prosecution seemed to be almost arrogant in their confidence, at least in news reports. They claimed to have overwhelming evidence. The judge disagreed.

Handing down his verdict, the judge ruled there was reasonable doubt Ritter was breeding gamecocks and selling them to cockfighters out of his home. He found it plausible that Ritter had stopped cockfighting when it became a felony in Virginia in 2006, as Ritter claimed, but held on to his old materials that had been found on the property.

Steve Ritter did receive a two-year suspended sentence and three years unsupervised probation for being convicted of two misdemeanor animal cruelty charges for owning two “malnourished” chickens (two of his wife’s old brown laying hens). But he was acquitted of 10 felony counts of promotion of animal fighting and eight counts of cruelty.  An important victory.

Mr. Ritter had lots of praise for his lawyer, defense attorney Robert D. Anderson. Asked if he would do anything differently, Ritter said, “The first thing I would’ve said is, ‘I want my attorney!’”

This case is a good example of why you need to think twice before you vote for Mark Herring as Attorney General if you live in Virginia. There are too many cases like this being pursued in the Commonwealth of Virginia, prompted by radical animal rights groups and their zealots. Animal cruelty is wrong but it’s also wrong to pervert the law to terrorize innocent, law-abiding citizens.